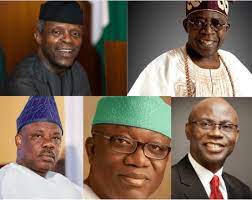 The ruling All Progressives Congress presidential aspirants from the South-West are expected to hold a final meeting in Abuja today (Saturday) to decide on the way forward, Punch reports.

The meeting would hold at the Abuja home of a former governor of Ogun State, Chief Olusegun Osoba, around 8pm.

Impeccable sources told Punch that the discussion would border on South-West unity and reach a possible consensus.

One of the aspirants, who wished to remain anonymous, said, “We will all be meeting at Chief Osoba’s home by 8pm in Abuja. Everyone is expected to be present. We will all sit together and discuss the need to ensure that the South-West gets the ticket.

“However, all of us will be asked to be truthful with one another and see who among us has the best chance of winning the primary. Then if anyone is willing to step down to boost the chances of the South-West, then this will be encouraged.”

Intense lobbying by some northern governors to ensure that the APC gives its presidential ticket to a northerner had unsettled the South-West bloc of the party.

This was said to have caused Tinubu’s outburst at a meeting with Ogun State delegates on Thursday, where he insisted that the APC must give its ticket to a Yoruba man and that he must be the favored candidate.

Nigerians do not know what hunger is all about – Sabo Nanono

3,905 Total Views Some angry youths in Kano State, on Monday, hauled stones at the advance convoy of the President, Major…

3,329 Total Views The President Muhammadu Buhari and the House of Representatives are on collision course over the deadline for the withdrawal of…