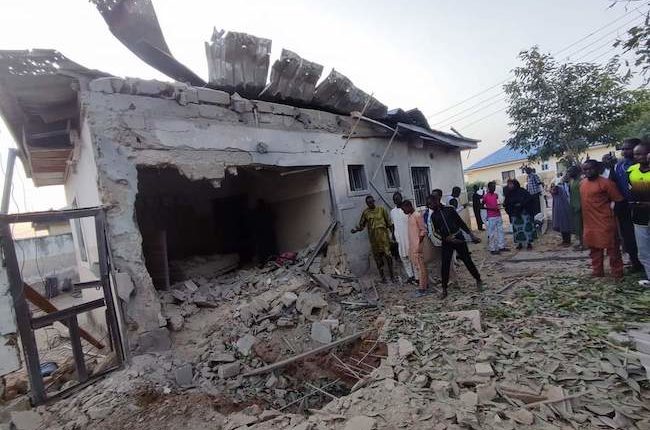 Residents of Maiduguri Community have in fear after terrorists  fires rocket launcher into some communities from the outskirt of Ngomari Old Airport not far from Borno State University.

The bombs reportedly landed on several houses around the vicinity causing extensive damage that was difficult to quantify as of the time of writing this report.

The governor of Borno State, Babagana Zulum also visited the scene on Saturday morning, calling on the military to wake up to its duties just as he said he was setting up a committee to assess the damages.

The News Agency of Nigeria (NAN) also reported that the Borno Police Command said a 6-month-old baby was injured when the terrorists fired five mortar bombs.

The state’s Commissioner of Police (CP), Abdul Umar disclosed that the terrorists fired the bombs from the outskirt of Ngomari Old Airport, behind Borno State University, adding that the mortars landed at different locations within the city and caused minor damages.

The CP said the first bomb landed inside a house belonging to one Ibrahim Abba-Fori, burning down a Honda Civic car while another destroyed a room in Alhaji Bukar Modu-Kullima house and injured the 6-month-old baby, Fatima Alhaji-Bukar.

“Another one landed at Gambari Njimtilo Ward near the house of Ahmed Yahaya, where the fence of the house was destroyed. The last explosive landed in a farm at Shuwarin Atom Village,” he said.

Umar explained that the 6-month-old victim was treated for minor injuries at the Umaru Shehu Ultra-Modern Hospital and discharged.

No life was lost in the attack, the CP said, adding that more police and military personnel had been deployed to the outskirt of Maiduguri for monitoring and patrols.  A military spokesperson did not reply to calls or text messages seeking comment.

Residents of 1000 Housing Estate said the incident occurred at around 6 a:m local time on Saturday, and that the rockets fell on a house but no one was inside.

According to a resident, Malam Bukar whose house was hit by the rockets: “I came back from mosque, then I was slumbering, so I heard a very loud explosion sound.

“I was terrified and my wife was screaming for help but thank God nothing bad happened to her.”

An eyewitness, Usman Zanna of Gomari said, “the explosives landed in our area and we suspected it was launched by Boko Haram terrorists and we assumed the target is the Hajj Transit Camp where their former colleagues are being kept in the camp.

“You know we have been complaining about the continued camping of the former insurgents in the city. If you noticed, they have been trying to attack all communities where their ex-colleagues are kept. We complained about this for so long but no one is paying attention,” Usman Zanna disclosed.

Sylvester’s death: We will assist the authority in their investigation ― Dowen College

4,208 Total Views Some angry youths in Kano State, on Monday, hauled stones at the advance convoy of the President, Major…

3,632 Total Views The President Muhammadu Buhari and the House of Representatives are on collision course over the deadline for the withdrawal of…