Home > slideshow > Stop politicizing withdrawals of soldiers from checkpoints, we owe them no money – Akeredolu 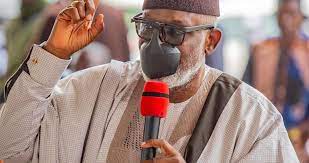 Stop politicizing withdrawals of soldiers from checkpoints, we owe them no money – Akeredolu

Governor Rotimi Akeredolu of Ondo State has said the withdrawal of the soldiers from the checkpoints across the state will not affect the security of the state as being insinuated in some quarters.

Akeredolu who stated this through his Senior Special Assistant on Security Matters, Alhaji Jimoh Dojumo, said other security personnel had been deployed to the various checkpoints to man the posts abandoned by the soldiers in order to check the activities of criminals in the state.

According to him, other security agencies which include the Police, Department of State Services (DSS), Nigeria Security and Civil Defence Corps, and other conventional security outfits were saddled with the statutory responsibilities of providing internal security for the people of the state, saying, all the security agencies in the state including the army had been receiving financial and moral supports from the State.

He urged the people of the state to stop politicising the withdrawal of soldiers from checkpoints, noting that days after the withdrawal of the soldiers, arrests had been by the Amotekun Corps in collaboration with other security outfits in the state.

He said “We should stop over celebrating this issue of vacation by a section of the security unit. When you look at it constitutionally, internal security belongs to the Police, DSS, and the other conventional agencies.

“If for whatever reason anybody is pulling out of it, I believe the place is not vacant. Go to all the checkpoints that are vacated now, the place is fully occupied by another set of security outfits. That is what we should celebrate.

“Look at the arrests that were made recently, was it not even after the vacation that Amotekun with the police team was able to record this success? So, we should stop politicising it. People are trying to bring politics into it and that will not help us in Ondo State or in any part of this country.

“The soldiers from all indication, are they not federal government agency, who are given to the state to work in tandem with the state executive?

“The constitution is there. It is not as if Mr Governor is not assisting and he is doing his best to assist all the security forces both in the matter of subvention on monthly basis, he used to give it out. So, we don’t really understand this aspect of non-payment issues. I believe politics is the one bringing the issues of non-payment.”

Residents of the state had expressed panic over the security of the lives and property following the withdrawal of the soldiers, but the police authorities in the state had assured the public of their safety by drafting men from the police command to the highways.

Meanwhile, operatives of Amotekun in the state have arrested a serial rapist and notorious kidnapper, Ibrahim Sanni, who has participated in various abductions of persons for ransom.

Speaking while parading the suspect, the Commander of Amotekun in the state, Chief Adetunji Adeleye, said the corps had been on the trail of Sanni and other members of his gang.

According to Adeleye, the suspect and three members of his group gang-raped a girl, who they kidnapped before demanding ransom for the release of their victim.

He said the suspect was apprehended following a tip-off from members of the public and said, “this suspect is highly notorious. He has participated in many cases of kidnapping in the state”

The suspect, 19-year-old Sanni from Niger State, who said he was a tomato seller in Iseyin and Ibadan, said he has been living in Akure, Ondo state capital for over five years, confessed to the crime.

3,744 Total Views Netflix will begin blocking subscribers from sharing their account passwords with people outside of their household in the…