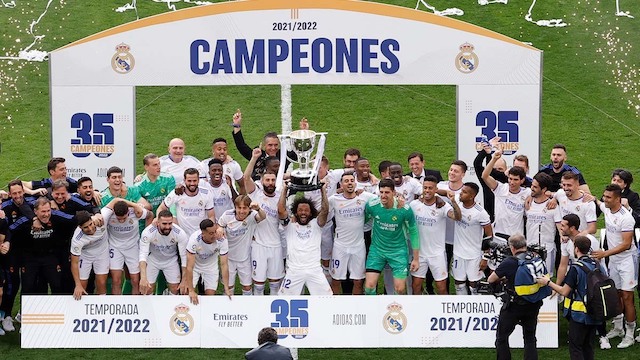 Real Madrid are champions of La Liga for the 35th time in the club’s history after defeating Espanyol 4-0 in Saturday afternoon’s clash.

The result confirms the title for Los Blancos with four rounds of matches remaining and guarantees that Carlo Ancelotti becomes the first coach to win a title in each of Europe’s top five leagues: adding Spain to his titles in Serie A, the premier Ligue 1 and the Bundesliga.

This represents a special title for Real Madrid as it is the first league title that they have lifted at their Santiago Bernabeu stadium since 2007. Three of their last four titles have been sealed away from home while the 2020 crown was won at Valdebebas, when the club’s home stadium was closed for construction work.

Madrid is still dreaming of European glory this campaign despite being edged out in a seven-goal thriller in the first leg of their Champions League semi-final against Manchester City last week. Ancelotti’s side have already progressed past Paris Saint-Germain in a sensational comeback before another magical Karim Benzema hat-trick helped propel them past Chelsea in the quarter-final stage of the competition.

Ancelotti’s side host City in the Santiago Bernabeu in the second leg on Wednesday and the Italian is aiming to become the first-ever manager to reach five Champions League finals, having previously participated in the showpiece with Milan in 2003, 2005, and 2007 alongside his appearance with Real Madrid in 2014.

That was his only title in his first spell at the club between 2013 and 2015, as he surprisingly returned to the club last summer from Everton after six years away. Ancelotti replaced Zinedine Zidane – who won two La Liga titles and three Champions League crowns – in the post last year.

4,530 Total Views It was heartbreak yet again for Liverpool, as they failed to win the title by a solitary point,…

4,611 Total Views Women presenters and reporters on TV channels in Afghanistan went on air with their faces covered on Sunday,…