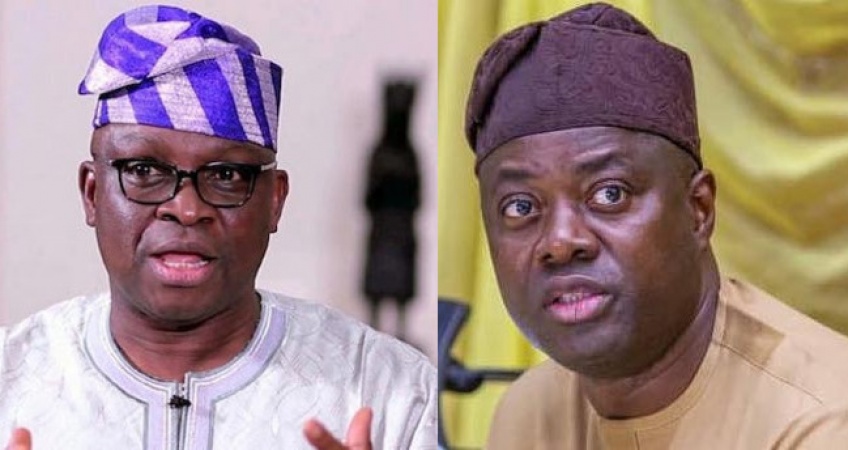 Things seem not to be in good shape yet among the party members of the opposition party PDP, most especially among the party leaders. The former governor of Ekiti State, Ayodele Fayose, has warned the Oyo state governor, Seyi Makinde, against tampering with the leadership of the People’s Democratic Party in Ekiti and other South-West states.

Fayose insisted that the Oyo governor has no right to interfere in the local politics being played in each South-West state despite being a zonal leader of the party.

The former governor said this on Wednesday when he led the National delegates of PDP including the chairmen of the party in Osun, Ekiti, Lagos to Abeokuta, the Ogun state capital.

Fayose stressed that Makinde, though the only governor in South-West, should allow every state to be governed by its local leaders.

He noted that he is ready to fight anyone that wants to take over the structure of the party in Ekiti from him.

He said, “There has been a reasonable cold war of who and who becomes the executive of the zone. Governor Makinde has demanded that the zonal executive be sacked and a caretaker be fostered on the zone which the party did.

“But, since the caretaker committee came into being, he has not allowed them to function because he produced the chairman.

“Beyond that, the fact that there is a sitting governor does not say I should go to another man’s state. Nobody should come to my state; if you come to my state, I will face you squarely.

“I will continue to respect him because he is my brother, I love him so much and I was part of his emerging

Earlier, the party in Ogun state had taken over the party Secretariat barely a month after the leader of a faction of the party late Buruji Kashamu died.

The other faction led by Sikirullahi Ogundele took over the Secretariat from the Kashamu faction in a peaceful manner and held a zonal meeting afterwards.

Rising from the meeting, a communique was issued and signed by the four states chairmen of PDP in South-West, which include Engr Deji Doherty (Lagos); Sikirullahi Ogundele (Ogun); Sunday Olatunde Akanfe (Osun); and Bisi Kolawole (Ekiti).

The leaders of the party in South-West led by Fayose resolved that no state should be ruled or governed by another.

The party chairmen emphasised that there is a need for the party to allow local politics in their respective states.

The chairmen resolved that “it must also be noted that the leadership of His Excellency, Governor Seyi Makinde is not in question.

“It must be noted that each state has its own leaders as politics is local and its leadership structure must be respected, but no state is ruled or governed by another.

6,771 Total Views The rate of brain drain in Nigeria medical sectors is becoming too alarming as more Nigeria doctors escape…