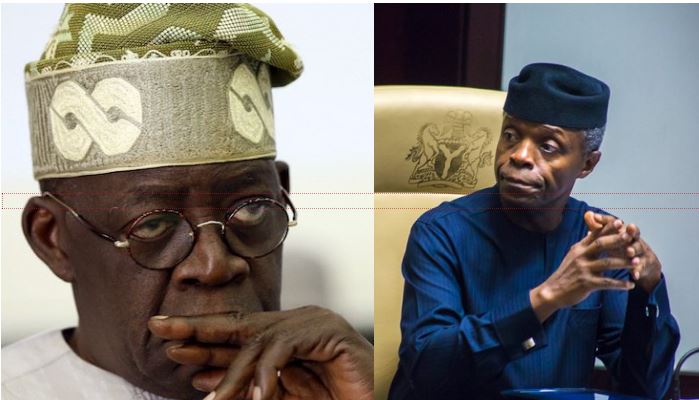 Reliable sources has confirm that already inform his Boss Osinbajo of his desire to take over from him at the expiration of his tenure in 2023.

With the intent, which has not been made public, the vice president will fight for the ticket of the ruling All Progressives Congress (APC) with the National Leader of the party, Bola Tinubu.

Tinubu had a few months ago informed Buhari of his intention to also contest for President in 2023.

Osinbajo served as the Attorney General and Commissioner for Justice in Lagos State between 1999 and 2007 when Tinubu was the governor.

Senate Chief Whip, Orji Uzo Kalu, and Senator Rochas Okorocha have all declared their interest in the presidency on the platform of the APC amid speculations that some aspirants from the North would soon join the race.

“Certainly, VP Osinbajo has told the president that he wants to succeed him,” the newspaper quoted a source as saying.

“They told him not to allow a third party to tell the president so that the ambition will not be misconstrued.”

Another source said when Osinbajo approached the president with the story, Buhari was not surprised.

“Buhari smiled in his usual characteristic manner…he listened to the VP carefully and while responding, he gave him the green light and wished him well without giving him any commitment or assurance of supporting him ahead of other contenders.

“He blessed the intention just the way he blessed Tinubu when he visited him in the Villa and unveiled his plan to vie for the presidency.

“And I think the president is being careful. Remember what he said while granting an interview to national television,” the source was quoted as saying.

Though Osinbajo has yet to openly declare his intention to run for President in 2023, many support groups and individuals, believed to be sponsored, have been rooting for him. Some of them have been campaigning for Osinbajo, urging him to contest.

4,769 Total Views Netflix will begin blocking subscribers from sharing their account passwords with people outside of their household in the…