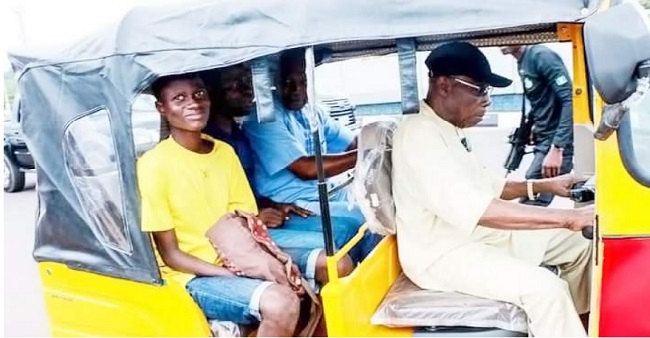 Former President Obansanjo is well known as cruise master. The former president took many on surprise, as he rode a tricycle popularly known as “Keke Marwa” conveying passengers in Abeokuta, the Ogun State capital.

A Facebook user with the name, Daniel Sync Olusanya posted photos of Obasanjo riding the tricycle from the Olusegun Obasanjo Presidential Library, Oke Mosan, to Kuto area in the city.

According to Olusanya, the Olusegun Obasanjo Presidential Library Youth Centre had given out 85 tricycles to 85 beneficiaries as part of Obasanjo’s 85th birthday anniversary.

Olusanya, in the post, said passengers that were picked randomly were super excited being driven by a former president.

He said in the post, “In celebration of Baba @85 and as part of the Youth Empowerment Programme (anchored by the Olusegun Obasanjo Presidential Library Youth Centre), the former President of Nigeria, Chief Olusegun Obasanjo, rode one of the “Kekenapeps” (a.k.a Marwa/ Tricycle) to Kuto Abeokuta with passengers on-board.

“The journey started from his OOPL residence to Kuto under bridge while picking up random passengers (who were beyond excited to be driven by the former president) along the way. It was such a beautiful moment to behold.

2,981 Total Views Netflix will begin blocking subscribers from sharing their account passwords with people outside of their household in the…