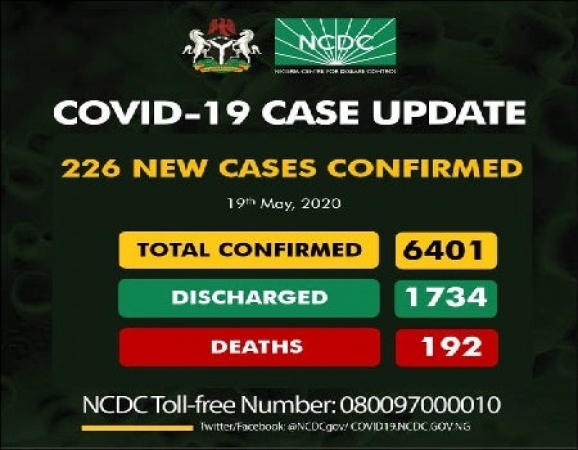 Other states that have recorded new cases include Edo with 11 cases, Kaduna with seven, Oyo with six, the FCT and Adamawa with five each, Jigawa, Ebonyi and Borno with four each, Nasarawa with three cases, Bauchi and Gombe with two each and one each in Enugu and Bayelsa states.

A total of 1,734 persons have, however, recovered from the virus while the death toll now stands at 192.

Meanwhile, Lagos has remained the epicentre of the virus with a total of 2,755 cases and closely followed by Kano and the FCT with 842 and 427 cases respectively.

Although the number of cases continues to rise with community transmissions, Lagos State, in particular, has recorded some wins in the fight against the pandemic.

So far, a total of 623 patients have been discharged from isolation centres across the state. On Tuesday alone, nine persons were discharged.

In addition to the recoveries and discharges, some pregnant patients have also successfully given birth to their babies.

“The reality is that in spite of the modest progress made, Nigeria is not yet ready for full opening of the economy and tough decisions have to be taken for the good of the greater majority,” Chairman of the Task Force, Boss Mustapha said during a briefing on Monday in Abuja.

“Any relaxation will only portend grave danger for our populace. Advisedly, the current phase of eased restriction will be maintained for another two weeks during which stricter enforcement and persuasion measures will be pursued.” (Channels TV)

12,735 Total Views Lagos, Nigeria – Union Bank of Nigeria is pleased to announce that it has received high ratings in…