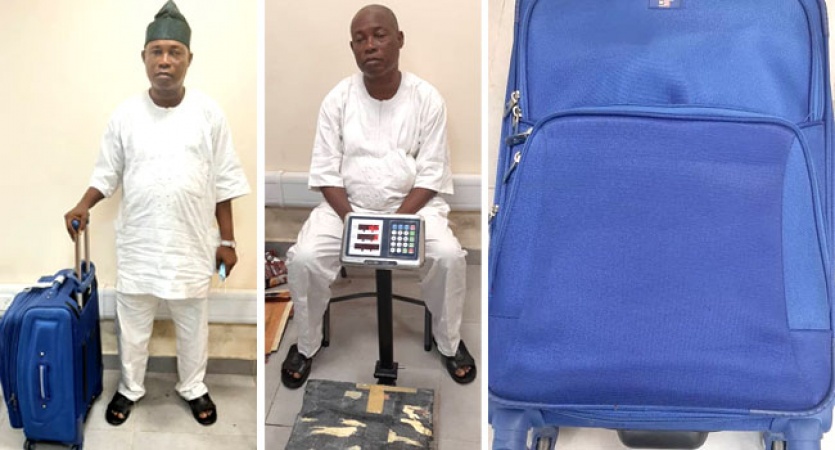 Operatives of the Anambra State Command of the National Drug Law Enforcement Agency, NDLEA, have busted a drugs ring in Anambra State and recovered 58.5 grams of cocaine and 13.9 grammes of heroine concealed in the palace of a prominent traditional ruler in the state.

The Agency, in a statement by Femi Babafemi, the spokesman, said: “Investigations are ongoing to unravel how the illicit drugs were hidden in the palace and the palace security guards are helping in tracing the dealer behind the consignment,” quoting Muhammadu Misbahu Idris, the Anambra State Commander of the NDLEA.

Similarly, the Agency disclosed that a notorious and wanted drug trafficker, Hassan Bishi Taiwo, has been arrested by operatives of the Murtala Mohammed International Airport, MMIA, Command of NDLEA. Below is a video of the false bottom, where the drugs were hidden:

The suspect, NDLEA said, was caught with three parcels of cocaine concealed in a false bottom created in his suitcase.

The agency added that preliminary investigations revealed that Hassan, who was intercepted at the E-Arrival hall of the MMIA at the weekend upon arrival onboard Ethiopian airlines at 1:30pm Friday, has been plying the illicit trade through the Middle East routes for some time. According to the Commander, MMIA Command of the Agency, Ahmadu Garba: “The suspect came into Nigeria through Addis-Ababa but he actually travelled to Addis-Ababa from Abuja. “Upon a thorough search, we discovered another ticket on him while our findings also show that he has been plying his criminal trade through some Middle East countries.” In the same vein, narcotics officers attached to a courier company in Lagos intercepted 500grammes of unaccompanied cocaine going to the United Arab Emirates and concealed inside the walls of packed cartons containing clothes.

“The operatives also intercepted another courier firm with one kilogramme of cannabis concealed in cream bottles going to UAE while 500grammes of ketamine hidden in artifacts and going to the US was also recovered from the same company in Lagos.

“Equally, another 480grammes of unaccompanied methamphetamine going to China was recovered from the same courier company.” Chairman/Chief Executive of the NDLEA, Brig. General Mohamed Buba Marwa (Rtd) has commended the Commanders, men and officers involved in the operations for their vigilance.

He charged them to continue with the vigour of the offensive action maxim of the new leadership of the lead anti-drug agency.

NLTP is not a land grab project, ranching is strictly business -Osinbajo

4,470 Total Views Some angry youths in Kano State, on Monday, hauled stones at the advance convoy of the President, Major…

3,894 Total Views The President Muhammadu Buhari and the House of Representatives are on collision course over the deadline for the withdrawal of…