Home > slideshow > Missing Alfa jet yet to be found -NAF 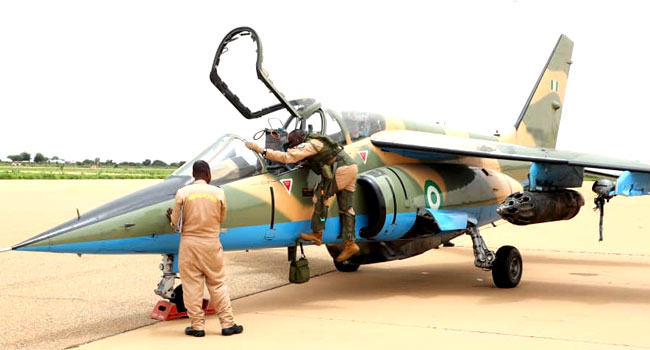 The Nigerian Air Force has dismissed reports from one of the national dailies that the wreckage of the missing NAF Alpha Jet has been found in Bama, Borno State.

The Director of Public Relations and Information Nigerian Air Force, Air Commodore Edward Gabkwet, in a statement, described the publication as unfortunate and misleading.

According to the statement: “The attention of the Nigerian Air Force (NAF) has been drawn to an online publication by a national daily of 5 April 2021 on the unfortunate crash involving the NAF Alpha Jet aircraft earlier reported missing.

“The report, with the caption: “Wreckage of Missing NAF Alpha Jet 475 Found in Bama,” claimed the missing aircraft as well as the body of one of the missing pilots have been found.

The report, which quoted “an authoritative military source” was not only misleading but absolutely at variance with known ethos of the Journalism profession as the Medium never made effort to contact the NAF to verify the story before the said publication”.

It added: “From the day control lost radar contact with the aircraft on 31 March 2021, the NAF as a professional fighting force has been keeping members of the public abreast and updated on the missing aircraft and combined efforts of the NAF and Nigerian Army(NA) search and rescue team to locate the crashed aircraft.

“It is therefore sad and disheartening that such an unverified story could be published without any effort to confirm its veracity from the NAF.

“It is not in dispute that the media as the watchdog of the society have the right to continually inform the public. It should however be done within the acceptable dictates of the noble journalism profession.

“While search and rescue efforts are being sustained until the wreckage of the aircraft is found, the NAF wishes to reassure the general public that it shall be informed of any update as regards the missing aircraft.”

Tuface voice out, Nigerian system is a joke

4,564 Total Views Breaking from a century-old tradition in the name of health and safety, the largest convention organization in the…