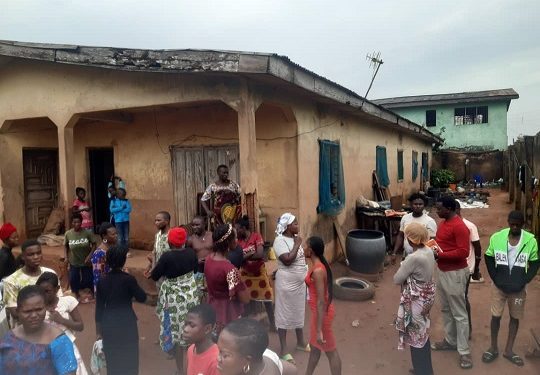 A husband, an indigene of Delta State, simply identified as Christopher, has beaten his wife, Mrs. Isoken Christopher, to death for allegedly refusing to offer him N2,000 loan.

The 45-year-old, described as a chain smoker and drunk by the eldest of his three children, Augustine, beat the businesswoman to death on Saturday night at No. 1, Agbontaen Street beside Ebvareke Secondary School, off Agboniro Street, Uselu, Benin, the Edo State capital.

Augustine, 13, disclosed his father, who wanted to escape from the room- and-parlour apartment after killing his mother, was apprehended and handed over to the police.

The son said the alleged killer-husband was working for a waste disposal company in Benin.

He alleged his father was always beating the deceased, a fashion items’ dealer, at the slightest provocation.

According to him, the suspect called their mother on phone to demand N2, 000 loan and started beating the deceased as he returned home around 9 pm when the money was not quickly given to him.

He said: “I tried to give my mother paracetamol and drinking water after the initial beating but my father threw them away.

“She then went to bathe after which she lied down outside to rest a little before coming inside to sleep but my father locked us inside the room and resumed the beating of my weak mother outside.

“Neighbours later helped us (the three children) to open the door, only to see our dead mother on the ground. She was then rushed to two different hospitals in the neighbourhood where she was confirmed dead.”

The corpse of the businesswoman was deposited in a morgue in Benin by policemen.

Edo Police Public Relations Officer, Bello Kotongs, a Superintendent of Police (SP), said the suspect had been detained at the Textile Mill Police Station, Benin from where he would be transferred on Monday to Edo Police Headquarters at the Government Reservation Area (GRA) for further investigation.

The PPRO said: “The man (Christopher) asked his wife to loan him some money (N2,000) out of the money she made at a burial she earlier attended on Saturday. When she refused, he then beat her to death.”

Kontongs said the timely arrival of policemen at the scene saved the alleged killer husband from being mobbed by angry youths in the area.

3,584 Total Views Netflix will begin blocking subscribers from sharing their account passwords with people outside of their household in the…