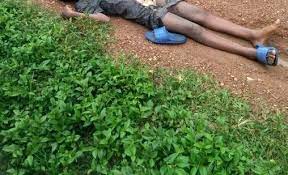 Two female siblings have been killed by lightning at Ikirun, the headquarters of Ifelodun local government area of Osun State on Sunday.

It was gathered that the incident occurred around 4:30pm around the Ogo-Oluwa area of the community
A resident, Mary Ojuolape, said the siblings were crossing a field in the area as rain was drizzling when the incident happened.

She said: “They were crossing a football field of a school around the Ogo-Oluwa area when they were struck down by the lightning.” Another resident, Dayo said there was a great crowd that gathered around the corpse of the two siblings.
The girls were said to be living with their grandmothers, one of them from Delta while the other from Ondo State. The chairman of the Ifelodun local government said, Iwas told that we could not immediately remove their boldies. They said Sango adherent must perform some rites. We were made to understand that some Sango worshippers from Ede are on their way to the scene

2,506 Total Views Troops of the Nigerian Army, Airforce and other security agencies have rescued Maj. Christopher Datong, the officer abducted at…

1,917 Total Views Yoruba nation agitator, Chief Sunday Adeyemo (aka Sunday Igboho), on Thursday, warned that no one should use his…