Home > slideshow > I’m hale and hearty, I was only dehydrated – EFCC Boss 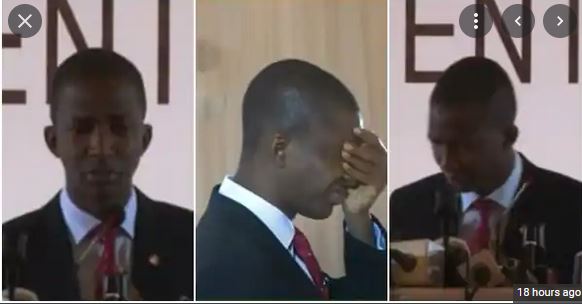 Contrary to many social media report on CHAIRMAN of the Economic and Financial Crimes Commission (EFCC), Abdulrasheed Bawa, claiming he slump while delivering a good will message in a public function in Abuja, footage from the event later reveal the report was false

Bawa was delivering the message at the third National Identity Day celebration at the Banquet Hall, Aso Villa when he became dizzy and had to leave the podium before he was taken to hospital.

Speaking on Thursday evening, the EFCC chairman said he had to stop his speech when he felt he was no longer comfortable, adding that doctor told him he was dehydrated and had to take water often.

He said after he left the hospital, he went to his office where he cleared his table to take some rest.

Bawa, while speaking on cybercrime, was narrating how the commission arrested a person in Ibadan who has 116 SIM cards, but paused, rubbed his eyes and face, staggered a bit on the stage and finally said he would want to stop there.

Immediately Bawa left for his seat, the dignitaries at the event, including the Minister of Communications and Digital Economy, Isa Pantami, stood up and held him as he sat on his seat before he was led out of the hall.

The event was paused for about 20 minutes after the dignitaries made their way back to the hall without Bawa.

During his address, Pantami said Bawa was stable, adding that it could be the challenges of the work because his kind of office requires a lot of commitment. In a statement later in the evening, the EFCC said its chairman is hale and hearty.

3,105 Total Views Some angry youths in Kano State, on Monday, hauled stones at the advance convoy of the President, Major…

2,529 Total Views The President Muhammadu Buhari and the House of Representatives are on collision course over the deadline for the withdrawal of…