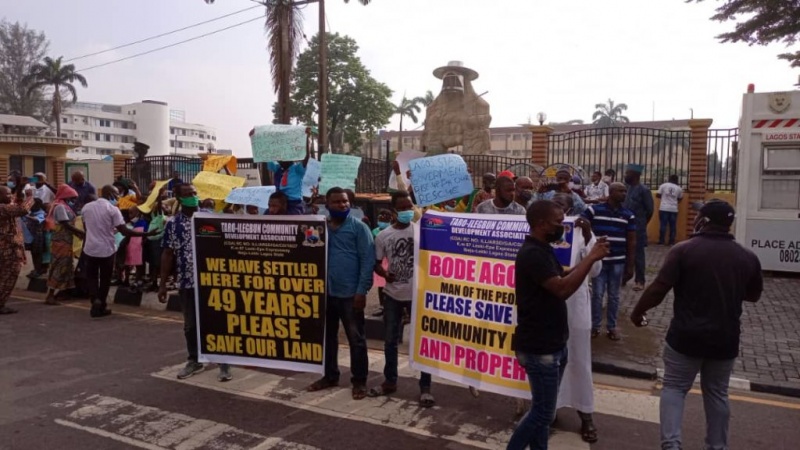 Residents of Taro-Ilegbun Development Community Association, Ibeju-Lekki embarked on a protest to the Lagos State House of Assembly, Alausa, to show their displeasure at the state government’s plan to demolish their houses and take possession of their land.

Landlords and residents of Taro-Ilegbun Community in Ibeju-Lekki Local Government Area of Lagos state had earlier raised alarm over attempts by the Lagos State Government to demolish their houses and seize their lands which they claim to have legally acquired and habited for decades.

According to the aggrieved community members, led by executives of Taro-Ilegbun Community Development Association (TCDA), during a peaceful protest at the Lagos State House of Assembly, Alausa, on Monday, June 7, 2021, they have been in undisputed possession of the said lands for more than 49 years, with over 3,872 families settled in the community.

In a letter dated June 7, 2021 and addressed to the Permanent Secretary, Land bureau, Secretariat, Alausa Ikeja, Governor of Lagos State, Babajide Sanwo-Olu, the Honourable Speaker, Lagos State House of Assembly, Hon. Mudashiru Obasa, among others, the community members made their demands known as they appealed to the government to save them from impending homelessness.

“We have been in undisputed possession of the said land for more than 49 years, with over 3,872 families settled in the community. Some of us are retired civil and public servants who have labored for the development of the State and the Taro-Ilegbun Community, Ibeju Lekki, Lagos State. We have made the community our home and we do not have anywhere else to go.”

“We hereby appeal to your good office to help us secure our titles to this land. Therefore, we seek your assistance in regularize our titles to these lands. We believe this will not only aid the housing program of His Excellency, the Governor of Lagos State, but it will also add to the revenue base of the Government through the Land Use Charge.”

“We pledge to carry out all necessary processes or activities that are required to successfully regularize our titles to the lands and continuously pledge to carry out developmental projects of the community to be in tandem with the Lagos State Master plan,” they said.

However, while addressing the protesters, the lawmaker representing Ibeju Lekki Constituency 2, Hon. Abdulraheem Adewale appealed to them to exercise patience, promising that their complaints and demands would be conveyed to the appropriate quarters for further actions.

He said, “When matters like this happen, patience is the best solution because there is never a problem without solution. Just as the law stipulates, you have followed by coming here to stage a peaceful protest, expressing your grievances.”

Speaking further, he urged them to maintain law and order so as to drive home their grievances and demands in a manner that will elicit positive results.

“As you have done the right thing by not applying violence in expressing your grievances, I urge you to keep it that way because that is the only way you would be heard. If you have written down all your demands, we will pass it on to the appropriate quarters for further actions,” he said.

Zenith bank Lead group A – most capitalized bank in Nigeria

1,177 Total Views ATTORNEY-General of the Federation and Minister of Justice, Mr Abubakar Malami, has disclosed that the Federal Government has…