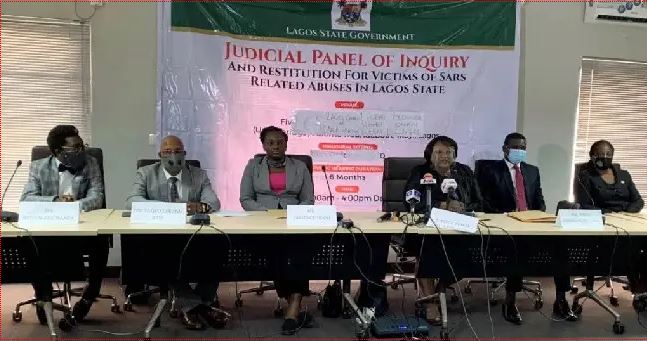 The Lagos State Judicial Panel on restitution for victims of SARS and other related matters has summoned the Inspector-General of Police, Mohammed Adamu, AIG Co-operative Police College, Ikeja, Commissioner of police in charge of Legal Dept, Abuja, and the Surveyor-General of Lagos State over alleged Assault on a bedridden 76-year-old petitioner, Prince Adewale Adewuyi.

The petitioner through his counsel, Debo Adeleke told the panel how his client was assaulted and brutalized by the police after his land worth N800m located in Badagry was forcefully taken over by the police in December 2013.

Adeleke told the panel that his client had sought the alternative despite resolution mechanism as recommended by the Citizens Mediation Centre (CMC) at the Lagos High Court but this, he said was frustrated by the police.

He, therefore, pray the panel to summon the police boss and other officers to appear before it to explain why they refuse to honor the resolutions reached by the CMC.

Reacting to the prayer, Chairman of the panel, retired Justice Doris Okuwobi, granted the plea and summoned the IGP, AIG Co-operative, COP Legal Dept, and Surveyor-General of Lagos State to appear before the panel within seven days.

Further hearing on the matter was adjourned to March 30.

Fidelity Splash Out Cash to Customers in Get Alert in a Million’ promo, After an Impressive Growth in Deposit During 2017

4,521 Total Views A fresh crisis has engulfed the National Association of Nigerian Students (NANS) as top officials of the students’…

4,084 Total Views The crisis rocking the All-Progressives Congress (APC) in Ogun State got messier at the weekend as the state…