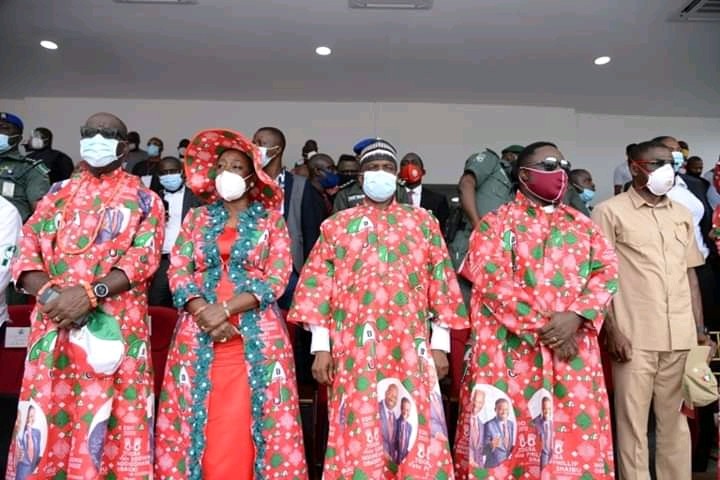 The grand finale of Godwin Obaseki Governorship campaign ahead of Saturday election staged at Dr. Samuel Ogbemudia stadium was filled to bream.  Nyesom Wike of Rivers State, Waziri Tambuwal of Sokoto State, Ifeanyi Okowa of Delta State, and other governors from the South-South and South-East States, yesterday, graced the grand finale political campaign of governor Godwin Obaseki and his deputy, Philip Shaibu.

The governors, in their separate speeches, charged the electorate to vote and protect their votes.

Taking his turn at the rally, the governor of Rivers State, Nyesom Wike, said governor Obaseki has done his best in going round the 192 wards to solicit for their votes and that the large number of persons that have turned out at the rally was a clear attestation that he has done what he needed to do.

Wike said going by the number of persons at the rally, the governor has already won the election and that the electorate must compel the Independent National Electoral Commission to announce the election result in his favour.

He urged the electorate to cast their votes for Obaseki to end godfatherism in the state, noting that Edo State must be a starting point in ending godfatherism in Nigeria.

On his part, the Governor of Sokoto State, Aminu Waziri Tambuwa, urged the people of the state to rise up to protect their votes and should not be intimidated or allow themselves to be enticed by money so as to sell their votes.

“I hear that somebody is coming here with a bullion van. Do not sell your vote. Do not be intimidated, vote and let it be counted. Vote for continuity,” he said.

Speaking also, Governor Ifeanyi Okowa of Delta State, commended Obaseki for his zealousness in taking his campaigns around the 192 wards, a feat that has not been done in the country.

Okowa said those who are calling him an outsider who is trying to dabble into Edo State politics should have a rethink because he is part and parcel of the state, noting that his grandmother is from Igbanke while his wife’s father is also from Igbanke.

Former governor of Anambra State, Peter Obi, said voting Obaseki the second time will guarantee a brighter future for them and for their unborn children.

Also, the National Chairman of the Peoples Democratic Party (PDP), Uche Secondus, said the European Union and other lovers of democracy all over the world must rise to see that the Edo State governorship election is free, fair and credible.

He said the ban recently placed on some political leaders in the country was a welcome development adding that it should be extended to any politician who tends to carry out such activities in the forthcoming governorship election in the state.

In his speech, the Edo State governor and governorship candidate of the PDP, Godwin Obaseki, thanked all the governors who graced the rally.

He said his campaigns around the 192 wards has opened his eyes to some of the challenges faced by most of the communities in the state promising that he would address the situation in his second tenure.

He also said he’s joining the PDP has made him know the importance of brotherhood, stressing that the PDP governors have shown him love and concern in this recent time.

The governor boasted that he has successfully conquered the local godfather and now, the fight would be on how to conquer them nationally.

4,156 Total Views There were indications at the weekend that Rivers State Governor, Nyesom Wike, and his supporters have returned to…