Home > slideshow > Edo 2020: Oba of Benin summon Obaseki and Ize-Iyamu to a peace accord, condemns attacks 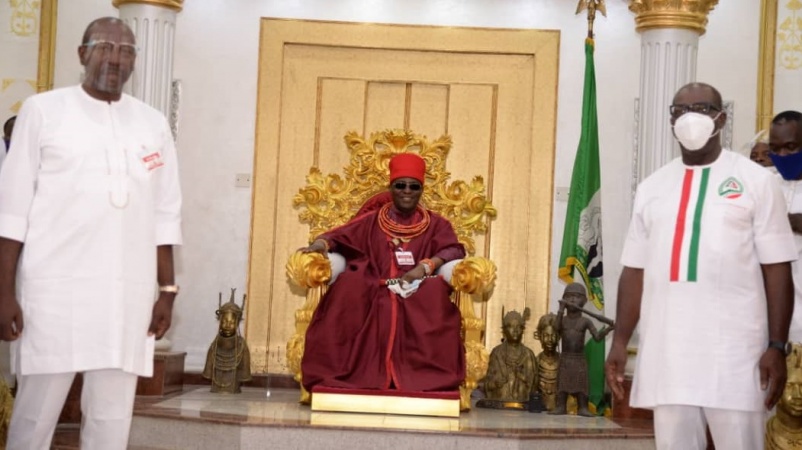 The Oba of Benin, His Royal Majesty (HRM), Omo N’ Oba N’ Edo Uku Akpolokpolo, Oba Ewuare II, has called on political actors in Edo State to eschew violence and embrace peace and tolerance ahead of the forthcoming gubernatorial election in the state.

The monarch gave the charge on Wednesday in his palace in Benin City, during a peace meeting with political actors to ensure a free, peaceful and violence-free gubernatorial poll, come September 19, 2020.

Oba Ewuare II also condemned the attack on Governor Godwin Obaseki and other guests, notably governors and other Very Important Persons (VIPs), at his palace, prequel to the flag-off of Obaseki’s reelection campaign.

According to the monarch, “For some time now, Edo State has been in the news politically for the wrong reason as political gladiators have been fighting dirty with their war of words.

“I want assurances from you people, to me and the people of the state, of a peaceful atmosphere in Edo State. I don’t like the ugly incident outside my gate when the Governor was embarrassed by some persons.”

He noted: “This crisis led to the disqualification of Governor Obaseki from the APC. The same credentials that qualified him in the last four years couldn’t qualify him again.

“Please don’t turn the state into the city of blood. I appeal to the two gladiators and all politicians to ensure peace and stop the shooting and violence in the state.”

Oba of Benin continued: “Let there be peace in Edo. Let us have a good relationship like that of former President Goodluck Jonathan and President Muhammadu Buhari. We are begging all the political gladiators in Edo to give peace a chance; don’t kill yourselves; stop the bitter statements to each other.

“Your home and families are here, so give peace a chance. We are all afraid that the state will burn to ashes. Please we need peaceful election in the state. I want to see that you are not paying lip service to the traditional throne; the Benin throne is not partisan.

“I am entitled to a vote; it’s my right as a citizen to vote, but I can’t vote for one candidate, because it is just like I have already taken sides by voting for one person; this is the sacrifice I have to make to ensure there is peace in Edo.

“Please communicate this meeting to your foot soldiers that they should stop the shooting and ensure the state is peaceful for all. I want both of you to work together for a peaceful election.”

In his remarks, Obaseki thanked the monarch for his fatherly role in ensuring that the state is peaceful before, during and after the election.

The Governor said: “As the Executive Governor and Chief Security Officer of the state, I have sworn to uphold the constitution of the Federal Republic of Nigeria and protect the lives and property of our people.

“I will never encourage violence as it would be irresponsible of me to do anything which would lead to the breakdown of law and order in the state.”

“I am not a violent person; I don’t have such tendencies. I have not participated in any form of violence and I will not. I have committed enough resources to ensure safety of the citizens,” he added.

Rivers State Workers in battle formation against Wike, Promise to cripple the State

IPOB okays APC and other political parties rally in South-East

13,503 Total Views Lagos, Nigeria – Union Bank of Nigeria is pleased to announce that it has received high ratings in…