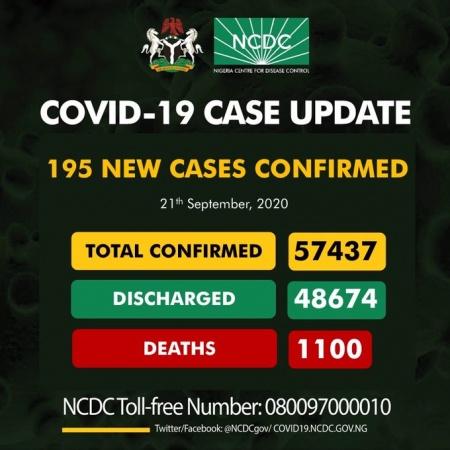 The Nigeria Centre for Disease Control (NCDC) has announced 195 new cases of the Coronavirus (COVID-19) infection in the country.

The NCDC made this known on its official twitter handle on Monday.

According to the agency, the new infection takes the total number of confirmed cases in the country to 57,437.

The health agency sadly reported two new deaths raising the death toll in the country to 1,100.

It also reported that 105 patients who had been treated and had also recovered from the infection were discharged across the country.

The NCDC said that Enugu State recorded the highest number of new cases with 51, followed by Gombe with 40, Lagos with 39, Plateau with 23, and the Federal Capital Territory (FCT), with 15.

The health agency said a multi-sectoral national emergency operation centre (EOC) activated at Level three, had continued to coordinate the national response activities across the country.

Meanwhile, the agency has warned that the majority of Nigerian states were not testing enough.

It said, “We do not have enough data coming out of these states to ascertain if we are improving or not or where exactly we are.

“So we have to work together; in summary, it is way too early to make any interpretation whether we are flattening the curve or not.”

The NCDC appealed to more states to test consistently so that progress could be monitored on a national level. (NAN)

479 Total Views Union Bank of Nigeria has launched a brand-new sonic identity tagged ‘The Sound of Union. At 105 years,…

2,919 Total Views Four officers of the Nigerian Navy have reportedly attacked an anti-robbery police patrol team in Satellite Town, a…