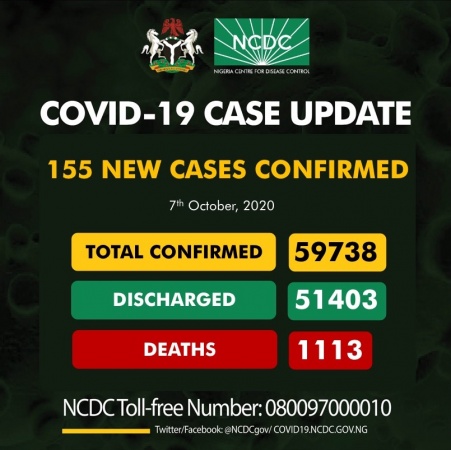 The Nigeria Centre for Disease Control (NCDC) has confirmed 155 new Coronavirus (COVID-19) infections in the country.

The NCDC made this known on its official twitter handle on Wednesday.

The News Agency of Nigeria (NAN), reports that the COVID-19 national death toll in the country remains 1,113 persons after four days without recording any death across the country.

The agency said that eight states had reported 155 new infections, bringing the total number of confirmed cases in Nigeria to 59,738.

The NCDC also announced that 95 patients recovered from the infection and were discharged after testing negative to the virus.

It said that Lagos State recorded the highest new infections with 84 confirmed cases followed by Rivers and Kaduna with 31 and 12 new cases respectively.

Ten cases were found in Osun, seven in FCT, Oyo, six, while Ogun and Kwara had three and two confirmed cases respectively.

The public health agency said that 59,738 cases had been confirmed nationwide, with 51,403 patients discharged, while 1,113 deaths had been recorded.

The NCDC said that a multi-sectoral national Emergency Operations Centre (EOC), activated at Level 3, had continued to coordinate the national response activities across the country.

The health agency said that the country had done fairly well in preventing an explosion in COVID-19 cases, but warned there were opportunities for upsurge as the economy reopens further.

“The country must strive to mitigate this risk. Our country is densely populated in the tropics; there’s no better place for viruses to thrive. It’s hard to say but this may not be our last big outbreak.

“We’re working to build a culture of awareness and responsiveness so we’re better prepared to respond,” it said.

Meanwhile, the agency now has molecular diagnostic capacity in every state in the country.

“We are pleased to announce the inclusion of the Niger Public Health Laboratory, Minna to the NCDC Molecular Laboratory Network.

“In eight months, we have activated at least one laboratory for COVID-19 testing in all 36 states,” the NCDC said. (NAN)

Labour Party won’t get up to 15 votes, Akin Alabi tweets

4,941 Total Views President Muhammadu Buhari had a piece of advice for the Nigerian National Petroleum Company Limited (NNPCL) yesterday: it…