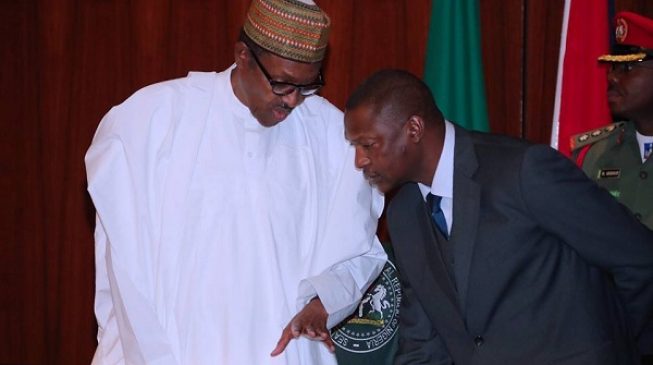 President Muhammadu Buhari has received 14 high profile corruption allegations against the country’s Attorney General of the Federation (AGF) and Minister of Justice, Abubakar Malami, said to be one of the President’s closest allies.

The allegations range from financial sleaze involving him and his family to influence peddling. In a letter sent to the President at the weekend, tagged “Compilation of Corruption Allegations and Abuse of Office Against the Attorney General of the Federation and Minister of Justice” three leading anti-corruption groups called for immediate probe of the Minister.

The groups said the immediate option before the AGF is to resign and give way for a full inquiry into the grand allegations that seem to portray the AGF as stunningly corrupt. In the petition, Buhari was urged to put in motion the Public inquiry or risk legal fireworks from lawyers in the country.

“It has to be now or never. There are very strong allegations of corruption against Mr Abubakar  Malami with clear evidence. President Buhari should act now. We have listed these corruption cases after painstaking compilation of high profile corruption cases involving the country’s No 1 law officer. The President must act without delay,” the coalition said in the petition signed by Civil Society Network Against Corruption (CSNAC) Chairman, Mr Olanrewaju Suraju, Centre for Anti-Corruption and Open Leadership, CACOL Chairman, Mr Debo Adeniran, and Co-founder, Say No Campaign, Ezenwa Nwagwu. CSNAC is a coalition of some 150 civil society spread across the country.

The coalition said the response of Buhari to the allegations has the prospect of determining the future of the anti-corruption campaign in the country.

“We are perturbed by these reports considering the revered position occupied by Mr. Malami, being the number one law officer of the country. Some of the allegations as conveyed in the media reports go to the root of breakdown of law and order and total disregard for the rule of law. These allegations serve as a slap in the face to your Excellency’s administration foremost goal of ridding the Nation of corruption. These allegations are totally opposite the core objectives of your administration and international perception of the country,” the three groups wrote in the petition to Buhari.

Top on the list is the alleged auctioning of sea vessels holding crude oil seized by the Federal Government, violating Section 31(2) and (4) of the EFCC Act 2004. “The AGF also authorized the sale of these vessels by companies under EFCC prosecution for similar offence of illegal bunkering and this action was admitted by the AGF through his media aide pleading presumption of innocence on the part of the accused, in the case being prosecuted by the Federal Government through EFCC,” the groups wrote, quoting a string of earlier media reports.

They accused Malami of twisting the law to shield his family members, corrupt officials and institutions in the most brazen manners. Malami was said to be responsible for the reinstatement of Abdulrasheed Maina, former chairman of the Pension Reform Task Team (PRTT) into the Federal Civil Service Commission without due process. He was said to have filed for the discontinuation of a 25billion Naira criminal charge against Senator Danjuma Goje without any justification, after over 7 years of diligent investigation and prosecution by the EFCC, whereas in June this year, he allegedly withdrew criminal charges against soldiers who were accused of killing police officers and a civilian in the bid to aid the escape of Wadume, a millionaire kidnapper.

The coalition said that on November 18, 2018, Mr Malami, through a lawyer from his office, Mr Pius Akuta, came to Lagos High Court to withdraw a case of fraud filed by EFCC against one Dr. John Abebe, a businessman and younger brother to late Stella Obasanjo but the EFCC resisted the illegal move before Justice Dada of the Lagos High Court on the ground that the AGF has no constitutional power to take over a case filed in Lagos High Court.

Other examples listed included the withdrawal of the case against the Chairman, Code of Conduct Tribunal (CCT), Mr Danladi Yakubu for criminal charges, demand for the withdrawal of the cases against Bello Adoke, Diezani Alison-Madueke and others involved in the Malabu scandal and his halting investigation of huge fraud in Nigeria Incentive-Based Risk Sharing System for Agricultural Lending (NISRAL).

The Malabu scam involves the controversial OPL 245 which has seen Nigeria recover some $78 million from individuals already convicted in Italy as oil giants linked with the graft continue to face prosecution in Milan.

The AGF was said to have sent a letter ordering the Economic and Financial Crimes Commission, the Independent Corrupt Practices and Other Offences Commission, (ICPC) and the Department of State Services, (DSS) and the Nigeria Financial Intelligence Unit, (NFIU) to all stop probe of the NIRSAL scam. He was said to have described the investigations as an “unhealthy competition” and “sheer waste of government resources”.

Malami is also accused of being the kingpin in the alleged duplicity of payment of $16.9 million fees to two friends as new lawyers for the recovery of the loot traced to a former Nigerian Head of State, Sanni Abacha, after a Swiss lawyer hired and fully paid by the previous government, Enrico Monfrini, to help in the recovery had completed his brief as reported.

Malami was said to have barred the prosecution of the former Comptroller General of Customs, Mohammed Inde Dikko, through a suspicious deal between the AGF and the Immediate past DSS Director on one side and the Comptroller General of Customs to refund $8 million to the Federal Government. The case was discontinued as Justice Dimgba refused to allow further prosecution of this matter under the guise that Mr. Dikko had kept his promise under the agreement by refunding N1,576,000,000 and more to the FG through the EFCC funds recovery account in the Central Bank of Nigeria (CBN). The FG earlier accused Mr. Dikko of stealing over N40 billion.

The groups said its investigations and media reports suggest that Malami own assets worth billions far ahead of what he owned before his appointment as the country’s AGF. Some of the properties listed in his name were a multimillion naira Rayhaan Hotels worth about N500million, located at opposite Aminu Kano Teaching Hospital, Zaria Road, Kano State, a property worth about N600million Naira locate at Ahmadu Bello Way, Nasarawa GRA, Kano, a newly constructed school at the back of Nitel at Gesse Phase 1, Birni Kebbi worth about N700million, a multi-million Naira property built by Mr. Malami for his son located at Gesse Phase II in Birni Kabbi worth over N400 million, a mansion known as Azbir Arena allegedly built by Mr. Malami for his second son. Azbir Arena an entertainment centre worth over N3 Billion, with a big plaza and kids playing centre and hotel all combined in one expansive property.

The groups accused Malami of other misconducts like using the official letterhead of the office of AGF to seek support for his son’s wedding and that he encouraged the defacing of Naira and other currencies to the embarrassment of the country and in violation of section 21(1) and (3) of the Central Bank Act, 2007. During the wedding of his son, Malami was also accused of allowing the breach of COVID-19 protocol and regulations putting the lives of Nigerians at risk. In Ghana recently, a similar incidence led to the resignation of a minister for breach of the country’s Covid-19 protocols.

The coalition stated: “At ICPC, Mr Malami also displayed his unpretentious hatred for the fight against corruption by writing a letter dated 16th December, 2016 withdrawing the case of fraud filed against Mr. Godsday Orubebe, the former Minister of Niger Delta, in a case involving over N1.97billion, on the ground that in his opinion, there was no basis for filing the charge against him.

“We strongly believe that the above allegations are deserving of thorough, immediate and urgent investigation through an independent panel of inquiry and the Attorney General suspended from office pending the conclusion of this investigation; the veracity or otherwise of these allegations is essential for the sanity of the public service.

“The law presumes any allegation as a suspicion until the suspect is so proven guilty; we as organizations, relentless in seeing transparency and accountability actualized and that due process is deployed in investigating corruption, abuse of power and office belief the allegations leveled against the Attorney General of Federation and Minister of Justice, Mr. Abubakar Malami is deserving of your urgent action.”

The coalition said they believe in the prevalence and sanctity of the rule of law. “We believe in due process which is why we have forwarded this petition to your Excellency for proper and diligent investigation and timeous action in order to restore the sanity of the core mandate of your administration to fight corruption which is at the verge of collapse as a result of the alleged abuse of power and office by the incumbent Attorney General and Minster of Justice,” the petitioners said.

9,360 Total Views Lagos, Nigeria – Union Bank of Nigeria is pleased to announce that it has received high ratings in…