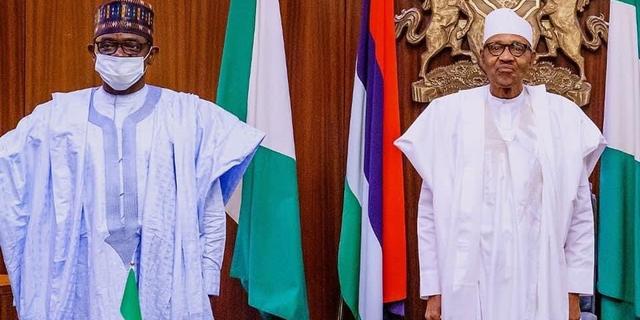 Buhari caution fractions in APC, back Buni as Party Chair.

The leadership impasse in the All-Progressives Congress (APC) has been halted by President Muhammadu Buhari. The President asked party members to support Yobe State Governor Mai Mala Buni as chairman of the ruling party by maintaining the “status quo”.

He directed Buni to ensure that the convention planned for March 26 is held “unfailingly”. President Buhari gave the direction in a letter he wrote to the governors elected on the ticket of the party after a meeting yesterday with Buni in London, United Kingdom, where he has been undergoing a medical check-up.

The President enjoined the governors to eschew behavior and utterances that could put the party in jeopardy and attract sanctions from the Independent National Electoral Commission (INEC).

The ruling party has been enveloped in crisis.

The caretaker committee and the Progressive Governors’ Forum were split into two camps over the alleged sabotage of the planned convention.

Buni, who was on medical vacation in Dubai, United Arab Emirates, was accused of plotting to truncate the convention by refusing to disclose the receipt of an ex-parte order, which Kaduna State Governor Nasir El-Rufai described as a “nuclear weapon”.

He said President Buhari approved the ouster of Buni so that Governor Sani Bello would drive the process to the convention.

In his March 16 letter addressed to Chairman of the Progressive Governors Forum (PGF), Kebbi State Governor Atiku Bagudu, President Buhari said: “As you are, no doubt aware, the All Progressives Congress (APC) is currently facing a litany of controversies and some level of uncertainties that may ultimately question its status and affect the status and feasibility of its proposed National Convention.

“In addition, it has come to my attention that, because of recent events, the APC is faced with a multiplicity of court cases pending against it in various courts across the country.

“As a result of this, the party faces the possibility and prospect of the invalidation of all its activities and actions by the Independent National Electoral Commission (INEC).

“Furthermore, the party has demonstrated its inability to proceed with the issue of effecting change in the leadership of its Caretaker Extraordinary Convention Committee (CECC), in a way that is inclusive, legal and respectful of the time limit set and required for giving the INEC sufficient notice of the time and venue for holding its convention.

“No doubt, these controversies and uncertainties, as enumerated above, pose a real threat to the party; and may lead to a possible non-recognition of its activities, elections and the probable invalidation of all its other actions by INEC. This may ultimately even lead to its implosion and non-existence.”

Buhari asked APC governors to salvage the party by getting their acts together.

He said: “There is, therefore, an urgent need for the party to, as much as possible, avoid all controversies, litigations and all other necessary distractions and quickly get its acts together.

“In view of the foregoing, therefore, I will like now to direct as follows:

“First, the issue of the leadership of the Caretaker Extraordinary Convention Committee (CECPC) should immediately return to status quo ante;

“Second, all members of the Governors’ Forum and their followers should desist from any behavior or utterance that will likely lead to disunity in the ranks of the party, and ultimately jeopardize the transition to the convention;

“Third, the Mai Mala Buni-led CECPC should accordingly, be allowed to proceed with all necessary preparations to hold the convention as planned-unfailingly, on 26th March 2022. Thank you very much.”

According to a source, who spoke in confidence, Buhari had an audience with Buni in London and directed him to take over the affairs of the party immediately.

The source said: “Buhari insisted that he did not order the removal of Buni. He was shocked to read about the turn of things in the party and the division among APC governors.

“At the London meeting, he gave Buni a must-do list for a hitch-free national convention and how to return the party to the path of democracy.”

An aide to Buni confirmed that he was airborne last night to Abuja.

He said: “Oga is already on his way to Abuja from London to take charge at the APC National Secretariat. He will do his best to hold a successful convention.”

EU expelled Russia as member of the council

4,520 Total Views Some angry youths in Kano State, on Monday, hauled stones at the advance convoy of the President, Major…

3,944 Total Views The President Muhammadu Buhari and the House of Representatives are on collision course over the deadline for the withdrawal of…