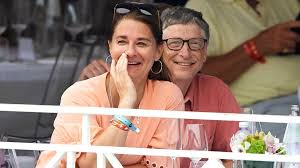 Bill and Melinda Gates, two of the most influential philanthropists in the world, said on Monday that they were divorcing after 27 years of marriage.

The couple have together emerged as leading figures in the global fight against Covid-19, and their separation is likely to send shock waves through the worlds of philanthropy, public health and business.

“After a great deal of thought and a lot of work on our relationship, we have made the decision to end our marriage,” the two said in a statement posted on Twitter. “We have raised three incredible children and built a foundation that works all over the world to enable all people to lead healthy, productive lives.”

Microsoft Corp. co-founder Bill Gates, 65, is the world’s fourth-richest person. Melinda Gates, 56, is a former Microsoft manager who’s become an outspoken advocate on global health and equality for women in her role co-running the foundation. They said in the statement that they’ll continue to work together at the massive philanthropic foundation they built to improve global health, combat climate change and bolster U.S. education.

Talking about the iceberg that crashed the big ship, Mr. and Ms. Gates have faced relationship struggles over the past several years, two people close to them said. There were several times when the relationship neared collapse, but they worked to keep it together, the people said. Mr. Gates decided to step down from the boards of Microsoft and Berkshire Hathaway, in part, so he could spend more time with his family, these people said.

“When he was having trouble making the decision about getting married, he was incredibly clear that it was not about me, it was about ‘Can I get the balance right between work and family life?’”

Well the worst has happen now, what is left is nothing but legal discussion on the family’s fortune, matter of who gets what?

INEC reschedules dates for all elections

EFCC Intensify Allegation Against Fayose as Immunity Soon to End

3,688 Total Views Breaking from a century-old tradition in the name of health and safety, the largest convention organization in the…