Home > slideshow > Battle against Obaseki not over yet as court reject his bid to stop APC, ADP Petition 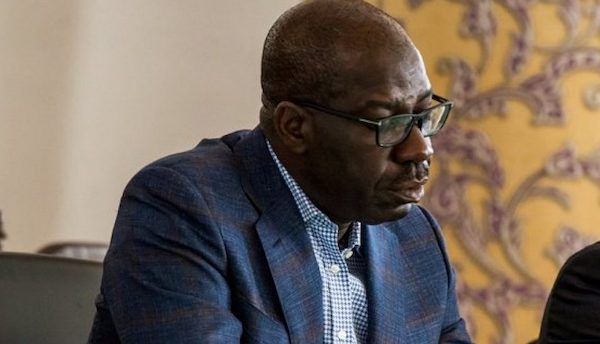 Governor Godwin Obaseki of Edo State on Tuesday lost his bid to have Edo State Elections Petition Tribunal strike out the names of Pastor Osagie Ize-Iyamu and the All Progressives Party (APC) from the petition filed by the Action Democratic Party (ADP).

Ize-Iyamu of the APC contested the September 19 governorship election against Obaseki of the PDP who eventually won. While Ize-Iyamu did not contest the outcome of the election, the ADP, however, joined him and his party in the petition it filed to challenge Obaseki’s victory.

Again, the tribunal also declined Obaseki’s prayer to strike out ADP’s petition as the tribunal insisted that it would hear the petition on its merit as against the request of the governor.

ADP prayed the tribunal to disqualify Obaseki over his controversial first-degree certificate from the University of Ibadan (UI) and nullify the votes cast for him, thereby ordering INEC to conduct a fresh election involving all other qualified governorship candidates, excluding PDP and Obaseki.

The tribunal, in a short ruling on Tuesday morning, declined Governor Obaseki and PDP’s requests as it ruled on two separate motions filed by INEC and PDP, seeking to strike the petition of ADP against Governor Obaseki and strike out the names of APC and its candidate, Pastor Osagie Ize-Iyamu respectively.

FG To Pays N88bn As Compensation To Biafra War Victims

4,774 Total Views Netflix will begin blocking subscribers from sharing their account passwords with people outside of their household in the…