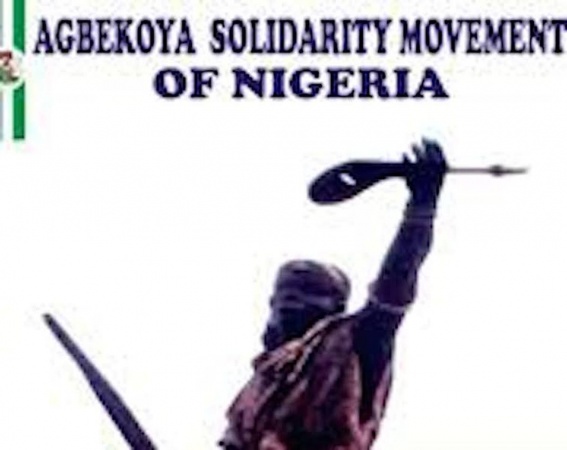 The “Agbekoya Warriors,” a pressure group in Yorubaland, has cautioned the Federal Government against its decision to arrest the Yoruba Nation agitator, Sunday Igboho and other persons championing the course of self-determination, saying that the call was legitimate under the United Nations’ Charter.

“Failure to listen to this advice might cause unnecessary and avoidable political tension in the country. The country has already been charged and the Buhari government should not add to the situation. Agbekoya doesn’t have guns or AK-47 because we don’t believe in it. God’s wisdom is our strength. Agbekoya are elders whose powers transcend conventional power. We have power of the almighty God and the power of the earth which is more than the language which President Buhari believes in: the language he is using to suppress the will of the people

“Our candid advice for the President is to apply wisdom in dealing with the current impasse, injustice, inequity and agitations. Nigerians had never had it so bad in the history of the fraudulent amalgamation of Northern and Southern protectorates, since 1914. In a democracy, people always have their way and the tenure of the president-elected and the elected representatives are limited or would expire, whether they like it or not.

“For our (Yoruba) political leaders, most especially, Asiwaju Bola Tinubu, Chief Bisi Akande, General Alani Akinrinade (rtd.), Chief Olusegun Obasanjo and Vice President Yemi Osinbajo, we urge you to retrace your steps. The time is ticking. Without a gunshot, the god of Yoruba nation will prevail. There is no joy for a leader to see his people being oppressed and subjected to hardship, avoidable killings, invasion, poverty and destruction of human life.

“Agbekoya would surely stand by the side of the people when the need arises. We urge all political leaders and our politicians in Yoruba land to come back to ‘Omoluabi values’. The Yoruba nation must be resolute and firm in our collective conviction. There’s no wrong in calling for self-determination. It is acceptable under the United Nations’ Charter,” the statement read.

Trapped victim of a collapse three storey-building in Lagos rescue

3,214 Total Views This was revealed in a post on social media by UK in Nigeria on Wednesday. Nigerians were urged…

1,945 Total Views The Olu of Agodo in Ewekoro Local Government Area of Ogun State, Oba Joseph Ayinde Odetola, has been…