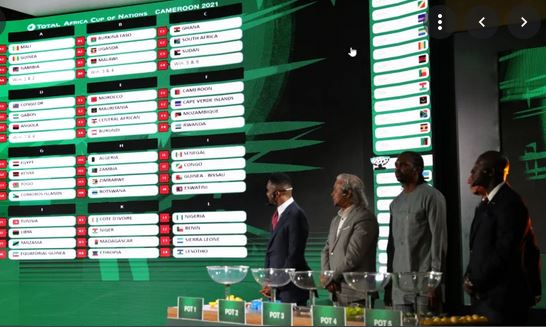 Nigeria’s Super Eagles have been drawn in Group D alongside multiple champions Egypt for the 2021 Africa Cup of Nations (AFCON) tagged “Cameroon 2021”.
At the draw for the final tournament, held in Yaoundé on Tuesday, the 24 qualified teams were divided into four groups, with Nigeria, Egypt, Sudan and Guinea-Bissau in Group D.
The opening match will pit tournament hosts and five-time winners Cameroon against Burkina Faso, the 2013 runners-up, in a Group A clash.
The draw has in Group A with Cameroon and Burkina Faso the duo of Ethiopia and Cape Verde, while Group B has Senegal, Zimbabwe, Guinea and Malawi.
Group C has Morocco, Ghana, Comoros and Gabon, with Group E having defending champions Algeria, Sierra-Leone, Equatorial Guinea and Côte d’Ivoire.
Group F has Tunisia, Mali, Mauritania and Gambia.
The News Agency of Nigeria (NAN) reports that 52 countries had taken part in the tournament’s qualifiers, with only 24 places available for the Jan. 9 to Feb. 6 event.
The qualification campaign had started in October 2019 and ended in June, due to the one-year hiatus caused by COVID-19.
Following Tuesday’s draw, the tournament organizers have indicated that the competition’s group stage will hold from Jan. 9 to Jan. 20.
Matches of the Round of 16 will hold from Jan. 23 to Jan. 26, while the quarter-finals will be on Jan. 29 and Jan. 30.
The competition’s semi-finals will hold on Feb. 2 and Feb. 3, while the third-place and final matches will take place on Feb. 6.
Five main cities have also been selected as hosts of the tournament, including Douala and its Japoma Stadium, and Yaoundé and its Ahmadou Ahidjo and Olembé Stadiums.
The others are Bafoussam and its Kouekong Stadium, Garoua and its Roumdjié-Adja Stadium and the Limbe-Buea venue which has the Limbe Omnisport Stadium.

Girl’s education is key to empowerment and equal opportunity – UNICEF

4,580 Total Views Some angry youths in Kano State, on Monday, hauled stones at the advance convoy of the President, Major…

4,004 Total Views The President Muhammadu Buhari and the House of Representatives are on collision course over the deadline for the withdrawal of…