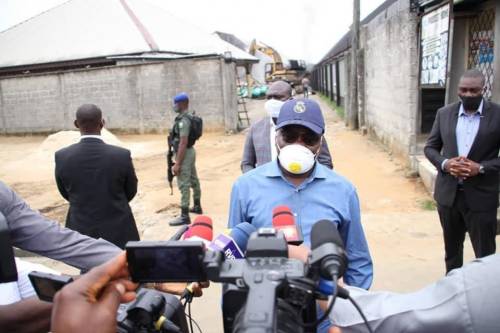 The immediate past Director-General of the Nigerian Maritime Administration and Safety Agency (NIMASA), Dr. Dakuku Peterside, has condemned in strong terms Sunday’s demolition of two hotels in Rivers State by Governor Nyesom Wike over alleged violation of an Executive Order.

Peterside, who says he had long observed the dictatorial tendencies of Wike, declared that the latest action of the governor was “wicked, insensitive, irresponsible and unlawful.”

According to him, Wike has left no one in doubt as to his lack of concrete pursuit of how to fight Coronavirus with solid policies and programmes but has rather resorted to brute force, a show of strength and muscle-flexing with imaginary enemies.

“Last week, Governor Wike made two broadcasts, where Rivers people expected him to lay out well-determined plans of how to ensure mass testing following the inauguration of molecular laboratories in UPTH and RSUTH with achievable timelines, while also strengthening other areas.

“However, no such thing was heard from the governor but threats upon threats as to how he would dethrone traditional rulers, how he will sack local government chairmen, how he will summarily arrest violators of the executive order and punish them, how he will auction their vehicles, amongst other threats. Governor Wike is not a law unto himself and cannot be the law.

“For good measure, the governor rounded up by saying he would demolish buildings or hotels found wanting in implementing his orders without recourse to the due process of law and natural justice that confers the right of fair hearing on the accused.

“Governor Wike’s utterances do not suggest that he is fighting the coronavirus pandemic alone. His actions suggest that there is more than what he is telling Rivers people. He has become a dictator whose words must be obeyed or be damned,” he stressed.

Dr. Peterside explained that the fascist attitude of Wike was capable of leading to the breakdown of law and order, as those who bear the crude method of the governor and their families could resort to mass protest, capable of exposing the state further.

“This crude method of governance and law enforcement is obsolete, counterproductive and will put Rivers State and her people in bad light before the right-thinking members of society.

“While we all support the governor to ensure that the state is free from coronavirus, his transformation into a dictator and a god that must be worshipped will be challenged by all well-meaning Rivers people and Nigerians at the appropriate time.

“Governor Wike must change from this destructive path and follow that of responsible leadership that has a human face and not one that will turn him to a demi-god that must be offered sacrifices to assuage his anger, vengeance and greed,” he summed up

Sources said the hotel demolition had much to do with a Peoples Democratic Party (PDP) youth leader in Eleme (Princewill Osaroejiji) who was declared wanted on Saturday by Gov Wike. The Commissioner of Information and Communications, Paulinus Msirim, had in a short statement said N5m bounty had been placed on Osaroejiji’s head to be paid to anyone who could give information on his whereabouts.

It was gathered that the youth leader leads a factional youth body that permitted some hotels to operate whereas another group opposed it. When the disagreement burst open, it was gathered, the governor got wind of the situation and furiously ordered the protected hotels to be demolished.

4,245 Total Views The National Chairman of the All-Progressives Congress (APC), Adamu Abdullahi has withdrawn from a suit filed against the…

3,344 Total Views Romelu Lukaku has returned to Inter Milan on a season-long loan, just a year after leaving for Chelsea….