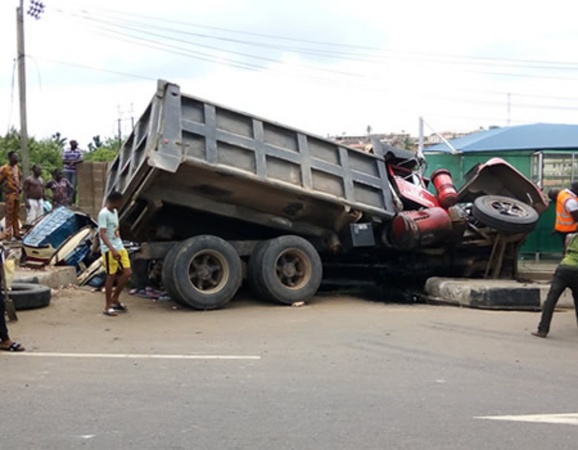 The Ogun Traffic Compliance and Enforcement Corps (TRACE) has said that a truck crushed a middle-aged woman at Onihale area, near Owode-Ijako, Ogun on Thursday.

The Owode-Ijako Unit Commander of TRACE, Mrs Temitope Oseni, who spoke on behalf of the Corps Commander, Mr Seni Ogunyemi, told the News Agency of Nigeria (NAN) in Ota, that the incident happened at about 8.23 am.

Oseni explained that a FAW truck, marked BHN 1353, was inbound Onihale area when it suddenly lost control due to brake failure and rammed into a motorcyclist and a woman who was about to alight in front of her father’s hotel.

She said that two boxer motorcycles and four persons were involved in the accident, with a male sustaining injury.

The TRACE unit commander said that the corpse of the deceased had been released to the family for burial, while the injured was taken to Famous Hospital at Iyana-Ilogbo, Ogun, for treatment.

She advised truck drivers and owners to ensure that their vehicles were in good condition before putting them on the road to avoid unnecessary loss of life.

Oseni also commiserated with the family of the victim and prayed God to grant them the fortitude to bear the loss.

She said that the truck and the two motorcycles had been removed from the road to ease free flow of traffic in the area. (NAN)

Lagos-Ibadan Expressway: No Motorist will suffer, if they obey road diversion signs

2,675 Total Views Labour Party presidential candidate, Peter Obi has cautioned his supporters and loyalists against being toxic, urging them to…