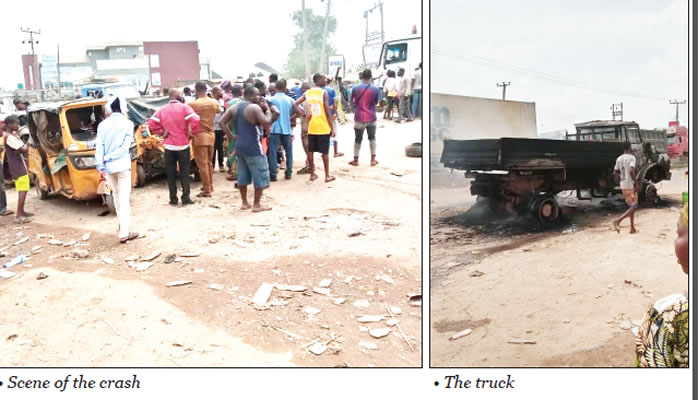 It was a gory scene on Thursday at bell junction in ogun state, as many feared dead, while many others sustained injuries after a truck rammed into some stationary tricycles at the Bell Junction area of Ogun State.

The accident, which occurred around 10am, involved a truck, whose driver lost control and rammed into the tricycles and some commuters waiting at the bus stop.

It was gathered that the truck driver was heading for Idiroko Road, when he lost control of the vehicle and in an attempt to avoid crashing into the other vehicles, rammed into the stationed tricycles, killing seven persons and injuring many others.

An eyewitness, Gbenga Osinaike, told our correspondent that a yet-to-be-identified elderly man, who was standing by the roadside, died on the spot, while six others died shortly after.

He said, “As soon as the driver lost control of the vehicle, he swerved to the right side of the road to avoid running into the vehicles ahead of him, but the move backfired as he rammed into the commercial tricycles parked by the Bells junction to pick passengers and some people standing by the bus stop.

“An elderly man standing by the road died on the spot with blood gushing out of his body, while six others died shortly after, and by the time the vehicle eventually came to a halt, several others had been injured.”

It was gathered that some officials of the Bells University provided first aid to the injured victims before they were taken to hospitals.

The Ogun State Sector Commander, Federal Road Safety Corps, Ahmed Umar, who confirmed the death of two people, said the agency could not carry out a rescue operation because the residents turned violent.

“We received a call about the accident, but we could not carry out any rescue operation, because the residents turned violent, but we learnt that two people died,” he stated.

12,065 Total Views Lagos, Nigeria – Union Bank of Nigeria is pleased to announce that it has received high ratings in…