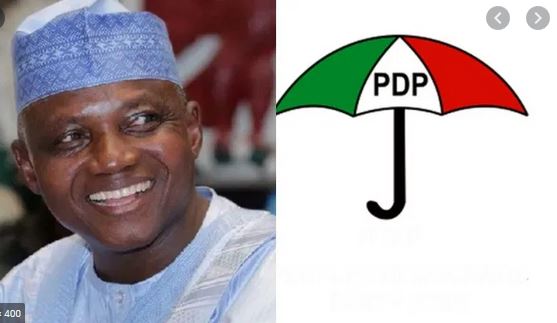 The Peoples Democratic Party has demanded immediate withdrawal of Garba shehu statement over the gruesome killing of 43 farmers by Boko Haram insurgents on Saturday, attributing it to not getting clearance before going to their farms.

Presidential spokesman Mallam Garba Shehu, in an interview with the BBC, said the slain farmers should have first obtained clearance from the military authorities.

Although Shehu has clarified his statement, the PDP, through its spokesman Kola Ologbondiyan, said it was alarmed by the comment.

The party described Shehu’s statement as reckless and bizarre, saying that it was an attempt by the Presidency to rationalise the gruesome killings.

”The PDP is outraged by the Buhari Presidency’s claims that the farmers were killed because they failed to get clearance before going to their farms; a statement, which is also an admission that the Buhari administration has been overwhelmed…” the party said.

It repulsive that the described as unfortunate that the presidential spokesman tried to justify the killing of farmers.

The PDP said: “This unpatriotic stance smacks of support for acts of terrorism and mindless killing of our compatriots by a government whose Commander-in-Chief had promised Nigerians to lead the battle against insurgents from the front.

“Such also provides further insights into the escalation of acts of terrorism in our country.”

Accusing the Presidency of insensitivity, the main opposition party said the official reaction amounted to spitting on the graves of the slain farmers and an unpardonable slap on the faces of mourning Nigerians.

“Perhaps this also informs why their party, the All Progressives Congress (APC), has not deemed it fit to have a word of lamentation for the death nor consolation for the bereaved.

“Our party, therefore, calls on President Muhammadu Buhari to immediately withdraw the offensive statement by his Presidency and apologise to Nigerians, particularly the people of Borno State,” the party added.

Shehu said in the interview: “The government is sad that this tragic incident has happened. Most of the 43 or thereabout innocent farmworkers had their throats slit by a heartless band of terrorists.

“People need to know what it is like in the Lake Chad Basin area. Much of those areas have been liberated from Boko Haram terrorists. But there are a number of spaces that have not been cleared for the return of villagers who have been displaced.

“So, ideally, all of these places ought to pass the test of military clearances before farmers or settlers resume activities on those fields.”

Asked if he was not blaming the farmers for going to the area, Shehu responded: “Not exactly. But the truth has to be said. Was there any clearance by the military which is in total control of those areas?

“Did anybody ask to resume activity? I have been told by the military leaders that they had not been so advised and certainly, therefore, it was a window that the terrorists exploited.

“The military is not present in every inch of space in that area. Even if the people are willing to go back, a lot of those areas have been mined and mine clearance needs to be carried out and those areas must be cast as being ok for human habitation or agricultural activity.”

In a subsequent tweet, Shehu clarified: “The State of Borno is essentially a military zone up till now that we are talking and much of what people do; much of where they go are governed by the exigencies of security.

“Routinely, traders, administration officials and even UN agencies get the green light to go to many of the areas to avoid trouble.

“Information from security agencies says that the Zabarmari marshlands are infested with land mines and movements in around those areas subject to military oversight.

“No one is delighted with the massacre in Zabarmari and there is nothing anybody will gain by playing blame games.

“The question I tried to answer on BBC was: did the security sign off on the area as being free of mines and terrorists? The honest answer is, no.

“I’m human with tons of compassion and empathy, and could not have said that the victims deserved their fate for ignoring security clearance.

“I was merely explaining the mode of military operations in the war zone of the Northeast. There are areas that are still volatile that require security clearance which is intended to put people out of harm’s way.”

Man-city Relegate Chelsea to 6th Position on the EPL Table

No corps member kidnap in Akwa-Ibom, Police Cries out

4,253 Total Views The National Chairman of the All-Progressives Congress (APC), Adamu Abdullahi has withdrawn from a suit filed against the…

3,352 Total Views Romelu Lukaku has returned to Inter Milan on a season-long loan, just a year after leaving for Chelsea….