Home > slideshow > Oyetola, Adeleke set for round-2 in Saturday election. 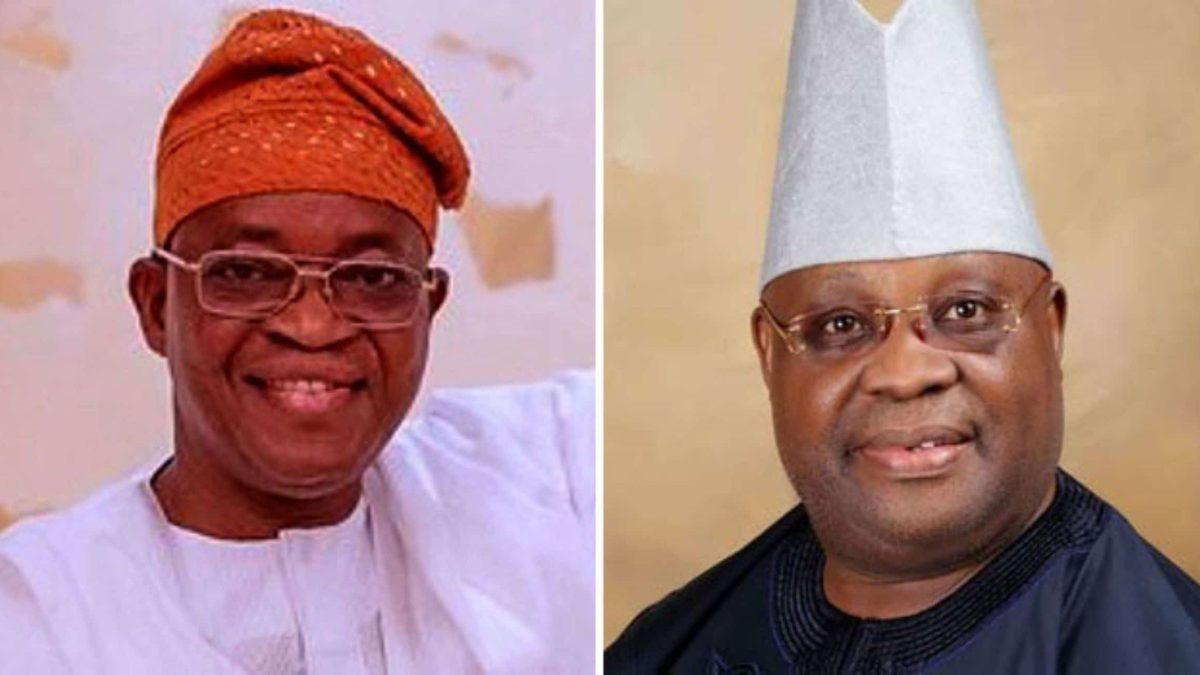 Oyetola, Adeleke set for round-2 in Saturday election.

Osun State will go to polls on Saturday to elect a governor that will steer the affairs of the state for the next four years. Fifteen political parties are fielding candidates to vie for the position. But, only five of them are in serious contention for the seat. Among the leading contenders are the incumbent, Governor Gboyega Oyetola of the All-Progressives Congress (APC), Senator Ademola Adeleke of the Peoples’ Democratic Party (PDP, Dr Akin Ogunbiyi of the Accord Party, former deputy speaker of the House of Representatives, Lasun Yusuf of the Labour Party (LP) and Goke Omigbodun of the Social Democratic Party (SDP).

But, two of the candidates, Governor Oyetola and Senator Adeleke appear to be the front runners. The old foes are set for a rematch; they faced each other as the two main contenders in the last governorship election in 2018 and the former triumphed after supplementary elections in some polling units where the contest did not hold on the D-day. The electoral umpire, the Independent National Electoral Commission (INEC) declared the election inconclusive, despite the fact that Adeleke polled 254,698 votes against Oyetola’s 254,345 votes because the number of votes cancelled in units where violence was recorded, (3,498) was higher than the gap of 353 votes that separated the PDP candidate from the APC candidate.

The electoral commission had to organise supplementary elections in the polling units where violence prevented it from holding it on schedule. At the end of the day, Oyetola emerged the winner, after he polled 255,505 votes against Adeleke’s 255,023. The then-candidate of the SDP, Senator Iyiola  Omisore who came third with 128,049 votes played a decisive role in Oyetola’s victory because the supplementary elections took place at polling units within areas where he had the upper hand. Thus, the APC wooed him and he appealed to his supporters to back the ruling party in the supplementary poll.

The two old foes are strategising in their respective strongholds to win massively so as to give them an edge against each other. The two parties have been plotting to edge each other out so that they can win the election. Money will be a major determinant of who will win the election. Party manifestos and other campaign strategies will also enhance the chances of the winner.  For the APC, the party is building on the successes it has recorded in the last three and half years. It is also promising to make adjustments and corrections where it has not performed up to expectations. Part of the local government areas where the party cannot afford to take chances in Ede North and Ede South where the PDP performed well during the last election. The opposition party polled 35,438 votes, against APC’s 11,537.

The APC, it is said, performed woefully in many local governments during the last governorship election because of protest votes spurred by some policies introduced by the then Governor Rauf Aregbesola, who is currently the Minister of Interior. Key among the reasons was Aregbesola’s inability to pay salaries for some categories of workers and entitlements of some pensioners. As a result of these, the APC lost woefully to the PDP in strategic local government areas like Ifelodun where Oyetola got 9882 votes, against Adeleke’s 12,269. Isokan, Irewole, Ilesha West, Obokun and Orolu. The ruling party has had to review some of the hardline policies that made it unpopular.  It is not leaving anything to chance to record a landslide victory this time around.

In the last three and half years, the Oyetola administration has addressed the issues that led to protest votes against the ruling party during the last governorship election in 2018. Some policies introduced by Aregbesola like a single uniform for every school, school merger, non-appointment of permanent secretary for ministries, huge debt profile, non-remittance of contributory pension, payment of modulated salary to some category of workers and wranglings within the APC, the block votes in Ede and other local governments that PDP won a landslide in 2018.

Unlike the last governorship election, Oyetola enjoys the power of incumbency and this is expected to boost his chances of winning. He would also be supported by the APC presidential candidate in next year’s general election, Asiwaju Bola Tinubu. The former Lagos State governor would deploy his entire arsenal to help Oyetola, who is a very close associate, win the election.

All these made some of his supporters predict a landslide victory for him at the poll this Saturday because all the issues used by the PDP to campaign against the APC during the last election have been resolved.

Oyetola is still battling with some of the problems created by his predecessor, especially none payment of over 20 months of salary arrears of workers and pensioners; this has become a campaign issue, as the PDP candidate has been harping on it to solicit votes from civil servants.

Despite that the fact that he has banished the ghost of half salaries or non-payment of salaries since he took over the reins of power, the billions of naira still being owed by the government remain one of the major reasons that could sway civil servants to vote for the any the opposition parties.

Intra-party wrangling could also affect his votes because of the exit of former deputy speaker of the House of Representatives, Lasun Yusuf who is now contesting on the platform of the Labour Party.

Besides, many of the loyalists of Aregbesola have not shown any indication that they would vote for the APC candidate. Such loyalists, under the auspices of a political association, The Osun Progressives (TOP), chaired by Lowo Adebiyi, are mere onlookers in this year’s electioneering campaign. This is because Aregbesola is yet to declare his support for Oyetola who was his chief of staff for the eight years he spent as Osun State governor. In fact, one of the leaders of the Adebiyi-led TOP, Kolapo Alimi recently defected to the PDP and was promptly appointed as the Deputy Director-General of the Adeleke Campaign Council. Alimi was a commissioner under the Aregbesola administration.

This will further strengthen the PDP in Irepodun Local Government Area because Alimi, an Erin-Osun-born politician will flex his muscle to replicate the 2018 precedent in the area where the PDP polled over 8000 votes to beat the APC which struggled to garner 6000 votes.

ASUU Strike: Your action will have generational consequence, Enough is enough - Buhari

4,179 Total Views Netflix will begin blocking subscribers from sharing their account passwords with people outside of their household in the…