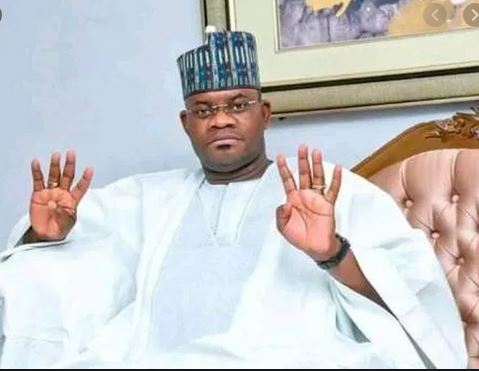 Kogi State governor, Yahaya Bello, Tuesday asserted that none of the state accounts has been frozen at the request of the Economic and Financial Crimes Commission (EFCC), restating his government’s position that the N20 billion bailout fund it received was appropriately applied.

According to him the reported freezing of the state’s account was a joke taken too far.  He made the clarification while fielding questions from reporters at the presidential villa, Abuja after a meeting with President Muhammadu Buhari.

A federal high court sitting in Lagos had been reported to have frozen a Kogi salary bailout account domiciled in Sterling Bank Plc, over a N20 billion loan obtained from the bank.

But Bello said the bank in which the money was said to have been deposited has denied having such an account.

Asked to disclose the status of the account, he said: “No Kogi state government salary account is frozen. None whatsoever. None of our accounts were frozen or embargo placed on any of our accounts by EFCC at all.

“I think it’s just a misrepresentation of facts or is a joke taken too far.

“My Information Commissioner and all those that are concerned with that lies peddled by the EFCC,  I think they have responded appropriately. And I will urge each and every Nigerian to please go to Kogi state website and all the facts are there.

“The banks have denied that we have such an account. And besides that, the bailout fund that we obtained, we appropriated in line with the agreement and understanding between Kogi state government and the workers. And all of these were done, we finished all of these, you know, in the year 2019.

“So first, there’s no N20 billion account, or N19 billion era, no fixed deposit account. So, I don’t know where the lie is coming from.”

While noting that the issue would soon be resolved, he described himself as someone with integrity who would not steal from the government purse.

The governor further stated: “I think in the days ahead, you will hear exactly where the matter shall be resolved. That’s why I said that is a joke taken too far. And I want to believe that either the officials of the EFCC may have misled the commission.

“Remember that we will not just allow this to lie low because Mr President pride in fighting corruption. And EFCC is one of the agencies that is being used to fight corruption.

“EFCC should not be seen to be going on a voyage of no discovery in order that the reputation of the commission and integrity of this particular government remains intact.

“As a person, I came into this office with my integrity high. And I will leave this office of government with higher integrity and all of my names that are ringing bell everywhere across the world today will know that actually, I earned these beautiful names, not because of stealing.

“Today, Kogi state is among the first that has published all of our accounts online. And all of these spendings have been put out there for the whole world to see from bank accounts to statements of account, to payroll, all of the documents are all out there. That is transparency.

“I think I challenge Nigerians to challenge all of those governors to publish that same particular bailout fund utilisation. And then you’ll be able to join me whichever way.”

Governor Bello also admonished the Chairman of the EFCC, Abdulrasheed Bawa, not to allow himself to be used for personal vendetta, saying that if anyone was targeting him because of his expressed ambition to contest the 2023 presidential election, they would not get him.

No bank should sack staff of any cadre – CBN

3,516 Total Views Some angry youths in Kano State, on Monday, hauled stones at the advance convoy of the President, Major…

2,940 Total Views The President Muhammadu Buhari and the House of Representatives are on collision course over the deadline for the withdrawal of…