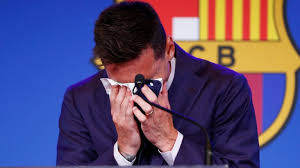 Messi was in tears as he received a standing ovation in his final Barcelona press conference to announce the end of his 21 years with the club.

Messi had travelled to Barcelona expecting to agree on the details of the announcement of his new five-year deal, and he confirmed he offered to reduce his wages by 50 percent. Unfortunately, the management pulls the plug instead.

Barcelona president Joan Laporta blamed Messi’s exit on the former regime at the club in addition to La Liga spending rules thwarting any hopes of the Argentinian staying in Catalonia.

PSG are offering Messi a two-year deal worth £25m a year after tax with the option of a further year and are confident the 34-year-old will sign.

Messi has spoken directly with PSG head coach Mauricio Pochettino and his lawyers are in Paris working on a deal.

But asked if a move to PSG will be his next move, Messi said: “That is one possibility, to reach those heights.

“I’ve got nothing confirmed with anybody. I had a lot of calls, a lot of interested clubs. At the moment, nothing is closed, but we are talking about a lot of things.”

8,014 Total Views Sonnie Bassey, the man who lost his wife in a fatal accident while she was chasing him and…