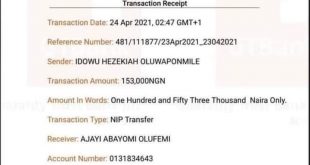 Men of the Nigerian Police force have found yet another bad reason to occupy top spot on most social media pages and websites over another barbaric act as exposed by the victim.

The Lagos State University (LASU) student by the name Hezekiah said the officers, armed to the teeth, led him out of the car and asked what he does for a living. “I told them I am a LASU Student they told me to unlock my phone but I refused; they threatened to kill me if I didn’t cooperate with them. They brought out a shocker, so I obliged.” The officers asked me how many bank accounts I had and how much was in each of them. “I told them I had two, GT bank and Union bank.

So, I opened my phone due to the threat from them and upon going through it, I was asked to pay the sum of N1,000,000 but I told them I didn’t have up to that amount. “Later on, they asked me to open my bank app, where they saw a balance of N288,000 and told me they would collect N250,000 out of it even without telling me what I did wrong. I begged them that I needed the money for some things; they insisted on collecting #150,000. “Then they asked me to give them my ATM card; I denied having one, so they took me to a Paga shop they have connection with. The Paga man collected a fee of N3,000 after negotiating from N5,000. On a final note, I did a transfer of #153,000.”

The transaction receipt of the money transferred showed Ajayi Abayomi Oluwafemi with account number 0131834643 with Union Bank as the receiver of the extortion.

Hezekiah likened the activities of the officers to armed robbers, said he was sure the Point of Sale (POS) operator was a collaborator with the accused Policemen.

Obaseki accused of political vendetta after he dethrones traditional ruler

2,172 Total Views The Federal Government has re-introduced a nationwide 12am to 4am curfew to curtail further spread of COVID-19. The…