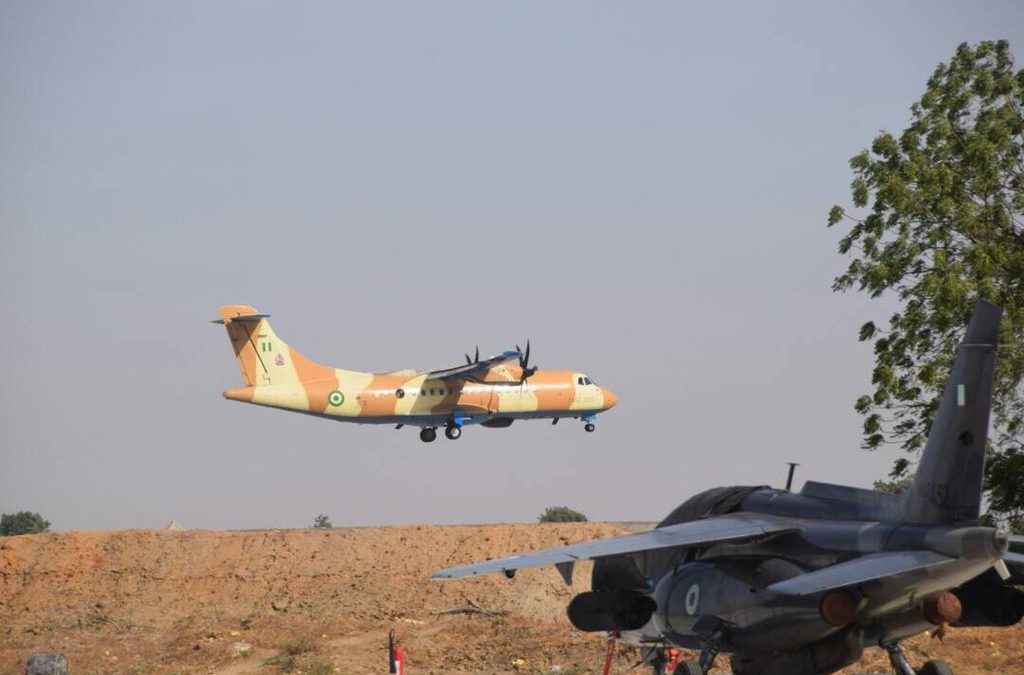 Fighter aircraft of the Nigerian Air Force (NAF) on Sunday eliminated scores of ISWAP-Boko Haram terrorists including their commanders in Lamboa in Kaga Local Government area of Borno State.

PRNigeria gathered that the multiple airstrikes conducted by a mix of our aircraft including Alpha-Jets, L-39 and MI-35 helicopters, might have also killed the notorious ISWAP Logistic Commander, Modu Sullum.

Modu Sulum was responsible for the destruction of power transmission towers at Malanari along Maiduguri-Damaturu Highway and attacks on travellers in Auno and Jakana axis.

The insurgents, in a convoy of eight-gun trucks, had invaded Lamboa, preparatory to launching a gruesome attack in Mainok axis in the state.

But the terrorists were swiftly engaged by ground and air troops, who foiled their missions after the NAF reconnaissance platform had earlier hovered over the location before the airstrikes.

It was gathered that over a dozen ISWAP-Boko Haram fighters were killed by bombardments of the military fighter aircraft.

He said “Yes, it was a very successful operation. Of the eight terrorist gun trucks sighted by our surveillance team, the aircraft successfully took out six of the trucks including an unconfirmed number of terrorists that were eliminated.

“Currently the ground troops of the Nigerian Army and our air elements are mopping up the area and assessing the situation.

“As we have said before, there is no hiding place for these terrorists especially with the renewed vigour, synergy and jointness being exhibited by all members of the Armed forces in the North-East theatre of Operation.”

Meanwhile, it was also gathered that other military offensives are simultaneously taken place in other axes including Magumeri with the resumption of office of the New Theatre Commander Operation Hadi Kai, Major General Chris Musa.

MASSOB to igbo’s in Lagos, defend yourselves with any material possession

5,397 Total Views   The Attorney General of the Federation (AGF) and Minister of Justice, Abubakar Malami, has confirmed that bandits…