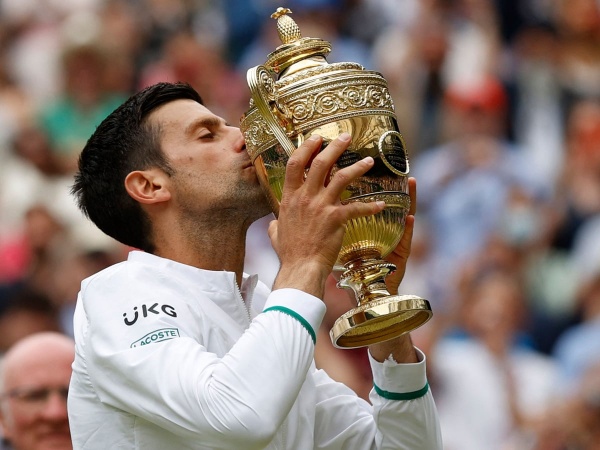 Novak has eventually done the unimaginable in tennis, especially in the Era of two legends who could have denied him achieving this feet in the world of tennis. Yesterday, Novak Djokovic won a record-equalling 20th Grand Slam title and sixth Wimbledon with a four-set victory over Italian slugger Matteo Berrettini with rival superstar Roger Federer hailing the achievement as a “wonderful performance”.

“I could definitely envisage that happening and I hope I will give it a shot. I’m in great form and played well and having my best form at Grand Slams is my number one priority,” said Djokovic.

A sixth victory at the All-England Club for Djokovic, who was playing in his 30th final at the Slams, added to his nine Australian Opens, two Roland Garros titles as well as three at the US Open.

Should he win a fourth title in New York in September, he will become just the third man in history after Don Budge (1938) and Rod Laver (1962 and 1969) to complete the calendar Grand Slam.

Talking about his trophy challenger, “It was more than a battle. He is a true Italian hammer I felt it on my skin,” said Djokovic of Berrettini.

Of sharing the record with Federer and Nadal, he said: “It means none of us three will stop. Roger and Rafal are legends, they are the reason I am where I am today. They showed me what I needed to do to get stronger, physically, tactically and mentally. Over the last 10 years it has been an incredible journey that’s not stopping here.”

1,832 Total Views The Federal Government has set a deadline of December 1 for civil servants to take the COVID-19 vaccine….