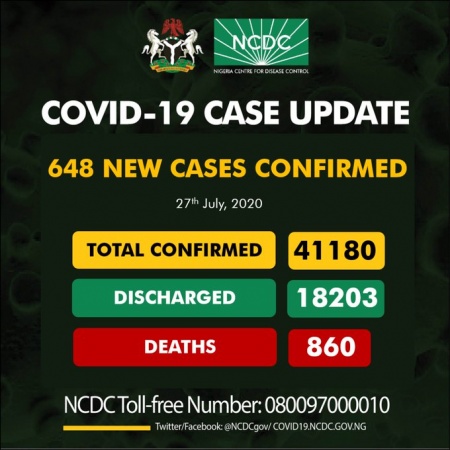 The Nigeria Centre for Disease Control (NCDC) on Monday confirmed that 648 new COVID-19 infections were recorded in 21 states across the country, which brought the total number of confirmed cases to 41,180.

According to it, till date, 41,180 cases have been confirmed, 18,203 cases, discharged and 860 deaths recorded in 36 states and the Federal Capital Territory.

It noted that a multi-sectoral national emergency operations centre (EOC), activated at Level 3, would continue to coordinate the national response activities across the country.

The Federal Government underscored the need for Nigerians to protect the older population and the most vulnerable from infection by giving special attention to risk communication and priority for admission for observation and treatment.

The government said that of utmost concern were still the asymptomatic cases with the potential to spread the disease, of whom the young and able-bodied could be difficult to manage.

8,154 Total Views Governors in the camp of the Rivers State Governor Wike yesterday boycotted the inauguration of the Peoples Democratic…