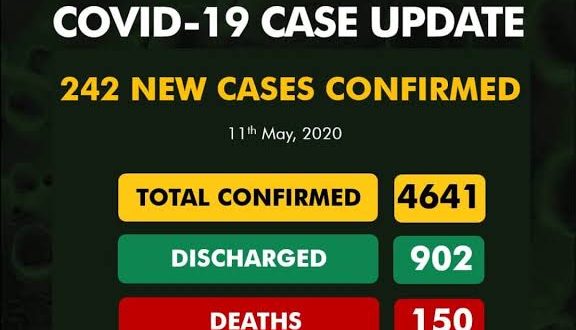 Nigeria on Monday night recorded 242 new cases of the Coronavirus all over the country.

According to a tweet released by the Nigeria Center for Disease Control, (NCDC), 88 new cases were recorded in Lagos, 64 in Kano State, 49 in Katsina, 13 in Kaduna State, nine in Ogun State and six in Gombe State

The tweet further revealed that four cases were recorded in Adamawa State, three in the Federal Capital Territory, with one case each in Ondo, Oyo, Rivers, Zamfara Borno and Bauchi States.

As at now, 4641 persons have tested positive for COVID-19 in Nigeria with 902 patients discharged and 150 deaths recorded.

4,943 Total Views President Muhammadu Buhari had a piece of advice for the Nigerian National Petroleum Company Limited (NNPCL) yesterday: it…