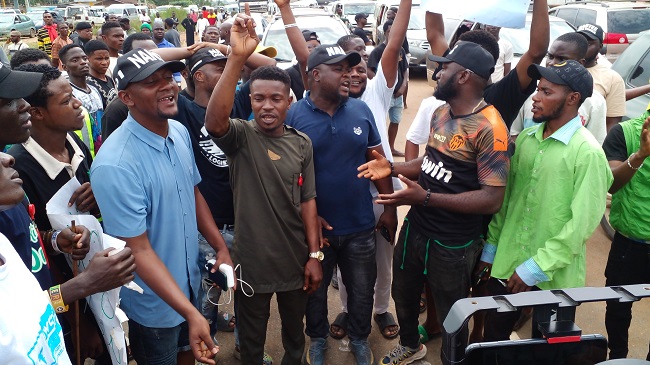 Travellers on Tuesday had a nasty experience along the Lagos-Ibadan Expressway as students of public universities in the country obstructed the free flow of traffic along the corridor for many hours.

The students in their scores with various placards and in the middle of the ever-busy highway at Olufu Ape Junction\AP2 near the Shagamu interchange section of the expressway chanting solidarity songs to protest their continuous staying at home due to the unresolved crisis between the Federal Government and their lecturers, who have been on industrial action for almost seven months and still counting.

The students under their umbrella body, the National Association of Nigerian Students (NANS) had been at the section of the highway as early as 7.30 am protesting with men of the Nigerian Police Force led by the Shagamu Area Commander, Mr Adebola Ojugbenle and some officers of the National Security and Civil Defence Corps on the ground.

The Southwest Coordinator of NANS, Mr Adegboye Olatunji and Deputy Senate President of the association, Elvis Ekudina, told Tribune Online, who monitored the protest for hours that they are tired to be staying at home idle and now ready this time around since the government according to them has not yielded to ASUU’s demands to sustain their protest until something positive happens.

They said they want to go back to school without further delay and continue with their studies, noting that the effects of the ASUU strike have taken a huge toll on them and their parents.

They said since they are not allowed to be in school for almost seven months and study and also don’t know when they would be back in school, they would occupy themselves with protest.

They said enough is enough of the prolonged crisis and that they would not succumb to any intimidation from any quarters for their action.

They said that the government dragging ASUU to industrial court over the matter is not the solution but to meet the demands of ASUU so that public universities will enjoy sustainable peace.

Meanwhile, travellers and motorists who were affected by the protest expressed great displeasure as to the unending face-off between ASUU and the Federal Government that caused NANS to embark on the protest.

They said the government that is serious and responsible to citizens and their plights should have before now resolved the crisis.

They said education is not a sector to play politics with among other sectors of the economy.

They said if successive governments including the current government had been doing the right thing by committing enough resources to public education, ASUU would not have gone on strike let alone students coming to the road to protest.

However, some travellers had to turn back to where they were coming from, especially those from Lagos and Shagamu\Ijebu-Ode axis when their vehicles were stuck for hours in the gridlock

They told Nigerian Tribune that they were already run out of time to meet their appointment at their destinations and better for them to go back home.

A nursing mother, who lives in Mowe and was going to Polaris Bank in Shagamu for an important transaction as there is no branch of the bank in Mowe according to her for example, came off the bus and trekked back to Mowe.

She said taking such a decision is best for her than remaining in the gridlock that she could not tell when it would phase off.

Nigerian Tribune observed that some Muslim faithful abandoned their vehicles in the middle of the road to observe prayers by the side of the road.

ABC 747 HP and one of them injured also stranded and have to abandon the car with a vehicle toying man.

Also, many were tasty but have no water to quench their taste let alone find something to eat.

But the gridlock is phasing off gradually as at 5.10 pm when our reporter left the protest ground.

The Shagamu Area Commander, Mr Adebola Ojugbenle was on the ground with his men since around 7.30 am.

4,563 Total Views Some angry youths in Kano State, on Monday, hauled stones at the advance convoy of the President, Major…

3,987 Total Views The President Muhammadu Buhari and the House of Representatives are on collision course over the deadline for the withdrawal of…