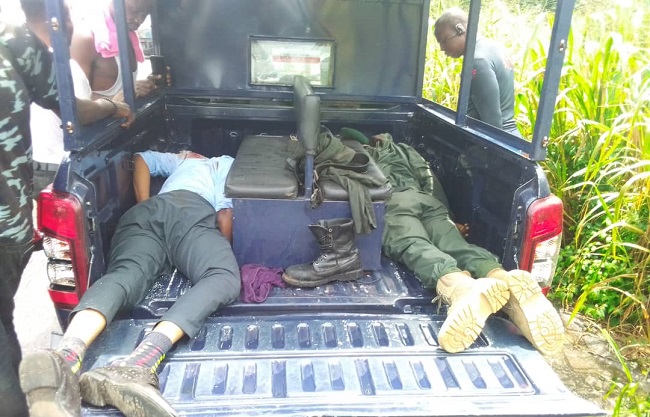 Three people have been confirmed dead in an ambush staged by dare devil robbers in Ondo State on Wednesday.

The incident which was the third in the last one month, happened around 3 pm when the armed men opened fire on the bullion van around Costain area, killing two policemen and a bank worker.

According to a source, who explained that the men opened fire on the bullion van while in motion, forcing the driver of the van to stop abruptly after being shot dead

The source said the bullion van was conveying an undisclosed amount of money to Ore when they ran into the hail of bullets of the suspected armed robbers who had laid ambush for them.

He, however, could not ascertain if the armed men made away with cash from the bullion van but said the hoodlums who operated for about 20 minutes searched the vehicle before leaving the area.

The attack is the third within the space of six weeks, where a total of four policemen had so far been killed in the various attacks.

The State Police Public Relations Officer (PPRO), Funmi Odunlami, who confirmed the incident said a policeman and the driver of the vehicle were killed while two other policemen were injured.

She explained that the bullion van was coming from Benin, Edo state and going to the rubber estate in Araromi obu, when the armed men who were in two Sienna buses attacked them, killing the driver of the bullion van instantly.

The PPRO said the armed robbers made away with an unspecified amount of money during the attack.

She, however, said police from the state command had commenced investigation on the incident while detectives are on the trail of the armed men.

Ortom incites one tribe against another – Garba Shehu

1,286 Total Views THE University of Abuja Teaching Hospital (UATH) has vindicated itself of alleged complicity in the death of a…