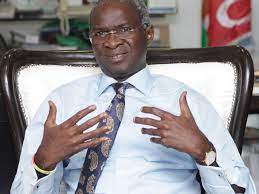 Minister of Works and Housing, Mr Babatunde Fashola has said a total of 7, 315 applications from prospective house owners were received within six days after the launch of the National Housing Programme.

Honourable Fashola made the disclosure on Thursday during the ongoing 2022 Budget defence at the National Assembly.

Addressing the Senate Committee on Housing led by former Ebonyi state governor, Senator Sam Egwu, the Minister of Works and Housing said the applications were for the available 5,000 Units of Houses for sale in 34 out of the 36 States of the federation.

Check revealed that the portal for the National Housing Programme comprising of one, two and three-bedroom apartments for sale at prices ranging from N7.2 million to N13 million, was opened at the Headquarters of the Federal Ministry of Housing in Mabushi, Abuja last Friday.

According to the Housing Minister, 7,315 applications were from Nigerians cutting across 14 or 16 States as no applications have been received from 20 states.

“The applications received so far from prospective House owners are about 2, 315 higher than the available 5,000 housing units available for now.

“This is even as applications have not been received from Nigerian workers in about 20 States.”

Fashola further told the lawmakers that the current National Housing Programme is a pilot or demonstration scheme meant, among others, to galvanize private sector participation.

On the Housing deficit, the Minister told the Committee chaired by Senator Sam Egwu that the solution to it is not just on the building of houses but marketing the empty ones.

He added that the National Housing Programme had not succeeded in the past and some of the houses built then still remained empty as a result of financial constraints.

1,200 Total Views The police have confirmed the arrest of Abdullahi Usman, an assistant superintendent of Immigration, over the recent invasion…

884 Total Views A fully loaded Premium Motor Spirit (PMS) or petrol tanker upturned at about 4.45 am when it was…