Home > slideshow > Court fault Gov Abiodun on demotion of 75 Oba’s, installs all back to position 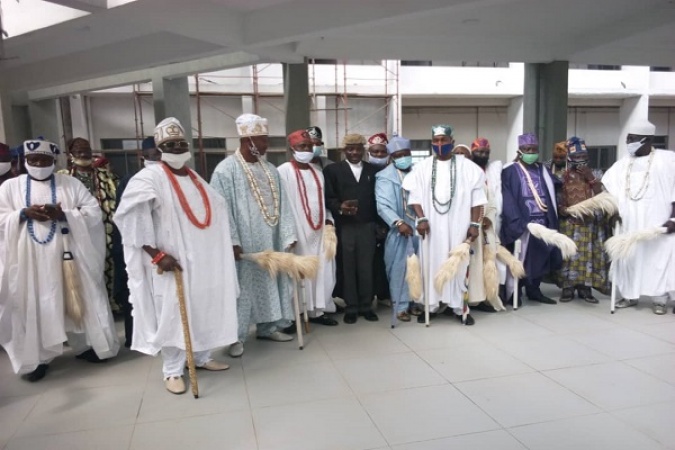 An Ogun State High Court sitting in Abeokuta on Tuesday affirmed the appointment of the 75 coronet Obas installed by the former Governor, Senator Ibikunle Amosun.

Amosun had upgraded the 75 village heads to Coronet Obas nine days to the expiration of his administration. But on the assumption of duty, Governor Dapo Abiodun set up a committee, which reviewed and recommended that the promotion of the traditional rulers from Baale to Oba be reversed.

In February, Abiodun announced the demotion of the Obas, as recommended by the committee chaired by the Olu of Ilaro, Oba Kehinde Olugbenle.

Miffed by the development, the 75 Obas dragged the governor and other officials of the state government to court, asking for their reinstatement and payment of their entitlements.

The coronet Obas also got a interlocutory injunction that maintained their appointment as coronet Obas till the court said otherwise.

The presiding judge, Justice Abiodun Akinyemi, in his judgment declared the removal of the Obas, null and void.

He also ordered that the claimants (the coronet Obas) be paid all remuneration attached to their offices from the date of their installation up till the moment of the judgment.

The judge also ruled that the Obas were not given a fair hearing by the review committee set up by the State Governor, faulting the process.

On the argument raised by the defending counsel that the then Executive Council was misled before the appointment of the Oba, Justice Akinyemi ruled that there is no evidence of misleading in the evidence presented by the defense counsel and that if there was ever misleading evidence, it didn’t come from the claimants.

He said the misleading evidence came from the State Ministry of local government and Chieftaincy affairs represented by the then Commissioner in the Ministry as a member of the then State Executive Council.

Obaseki commiserate with Oshiomhole, Ize-Iyamu over crash, death of security aides, others

Access Bank MD arraign in Court alongside others over alleged $6.3m fraud case

4,551 Total Views Some angry youths in Kano State, on Monday, hauled stones at the advance convoy of the President, Major…

3,975 Total Views The President Muhammadu Buhari and the House of Representatives are on collision course over the deadline for the withdrawal of…