Home > slideshow > Why I return back to study law — Rotimi Amaechi 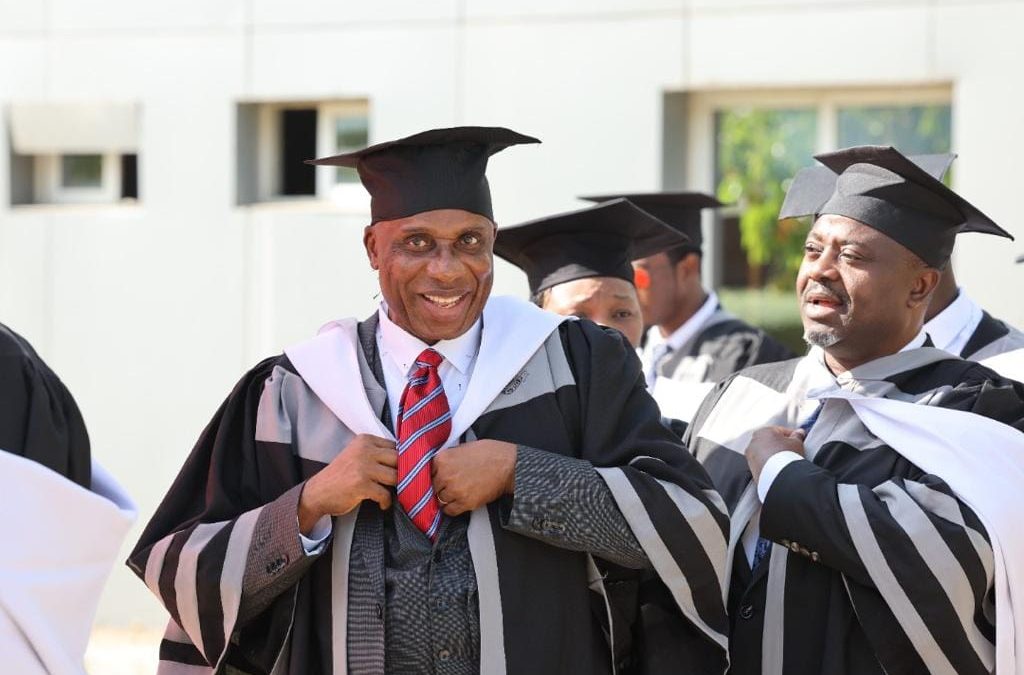 Why I return back to study law — Rotimi Amaechi

The Former Minister of Transportation, Rotimi Amaechi, has explained that he went back to school to study Law just to fulfill his father’s wish to be a lawyer.

But the former governor of Rivers State, who hinted that he would go a step further by going to Law School to be called to bar, said he had no intention of practicing the profession even as he said he had started Masters in Corporate and Company Law at Kings College, London.

Speaking in Abuja on Sunday, the frontline politician and chieftain of the ruling All Progressives Congress (APC), said contrary to claims in some quarters that he bought the Law degree certificate, he actually worked hard for it.

He said throughout the time of the program, he was dedicated to his studies, disclosing further that even as a minister, he was always ahead of lecturers and students in punctuality, a development he disclosed, made the Baze University, where he attended to present him an award for being diligent and punctual.

He said going back to pursue a fresh degree in Law at the age of 57 was normal to him, saying he merely achieved what he had wanted a long time ago.

He said: “Going back to obtain a Law degree at 57 is normal. I should have graduated a long time ago. When I hear people say I bought a degree, I just laugh. I laugh because until I started campaigning for presidency, I never missed a class. So for three years and six months, I never missed a class. And I came before all the lecturers and I came before all the students.

“The school gave me an award for being diligent and punctual. I never failed any course work. But that’s not important, what is important is that I wrote all my course work in person, so they can’t say lecturers passed me.

“And in Baze University, we don’t write matriculation numbers or our names, they give you a barcode which you place on the answer sheet. So when the teachers mark, they mark what is called blind marking and they can’t take it home. They mark it there in the school, if they can’t finish, they leave it there and come back the next day. When they come the next day, they continue. And as they are marking, they mark with a barcode so they don’t know the name of the person or the matriculation number and I don’t think they are handwriting experts.

“Let me give you an instance. I scored 69 percent in Jurisprudence which was a B grade. The person who taught me Jurisprudence was my supervisor in my long essay, I’m sure if he had known that it was me, he would have added me one percent to make it 70. The whole faculty was like “oh, no, he should have added you one percent to make it 70,” he said.

Asked about his inspiration to pursue the course, Chief Rotimi Amaechi explained: “First and foremost, it was to fulfill my father’s wish that I read Law. At least, I have satisfied his wish and he would have been happy if he was alive.

“He was in love with the work of Chief Rotimi Williams who was one of the best lawyers then and felt I should be like him.

“When I got the admission, I started asking myself how I would cope with my work. I would go to school as early as 8 am and report to work by 6 pm. I would work from 6 pm to 11 pm and sometimes 11:30 pm then I go home. I did that on Mondays, Tuesdays, and Thursdays. Wednesdays were cabinet meetings. I worked Wednesdays and Fridays,” he explained.

Asked if he would go to Law School, he said: “Yes, I think so. I may go to Law School. I’m already doing a Masters degree in Corporate and Company Law at Kings College, London. I hope to combine it with Law School.

“I don’t intend to practice but to have the knowledge of Law and the certificate. It is to help me not to make some mistakes. There is no excuse in law. So they are some things you can’t know except you read Law,” he added.

The former governor of Rivers State, while admitting that he refused to fund the establishment of Law School in the state while he held sway as the governor, faulted his successor for committing the state’s money to the project which he described as the Federal Government’s responsibility.

“By the time I did an audit of education in Rivers State, we trained 90,000 teachers and I employed 13,200. So, that money that he used in building law school would have been used to employ more teachers.

“It’s a Federal Government responsibility. I told them I was not interested but I would give them the land. So the money spent there could have been used in building more schools, employing more teachers and training them. Like out of the 13,200 teachers we employed, only 3000 were teachers, the other 10,000 were people who were just looking for jobs and we employed them and took them to Rivers State University of Education to train them for six months.

“So that money that you are investing in a big Federal Government project, you should have used it to employ more teachers, build more schools and create more jobs for our people. Rivers State has the highest number of unemployment,” he added.

Atiku did not fight Obasanjo, he only did his Job – Dino Melaye

2023: No going back, G5 governors insist demand must be met

3,013 Total Views Netflix will begin blocking subscribers from sharing their account passwords with people outside of their household in the…