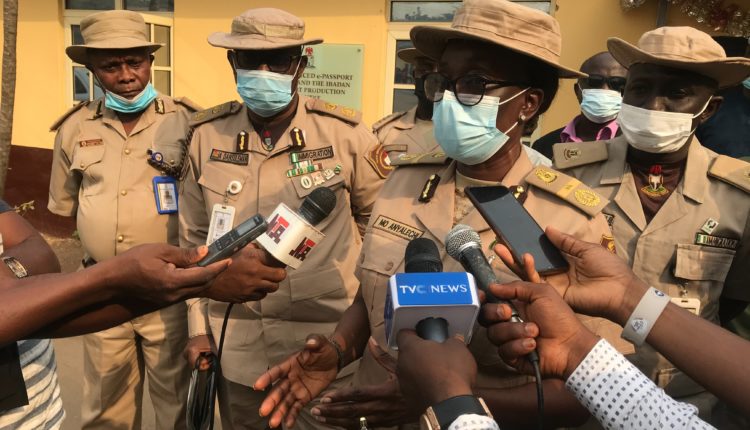 The Assistant Controller General of Immigration Service in charge of passport and other travel directorates, Modupe Anyalechi, has promised Nigerians that all efforts are being made to ensure that the March deadline is set for clearing of backlogs of passports for Nigerian applicants is met.

Stating this in Oyo Command of the Nigeria Immigration Service in Ibadan, Anyalechi, who spoke on behalf of the acting Controller General of Immigration, Isah Jere Idris, said that she and officers from Abuja came with about 30,000 passport booklets to clear the backlog, with a view of meeting the target set by the acting CGIS.

“By the end of March, the issues of backlog would have been a thing of the past,” she stated.

According to the Assistant Controller, “I’m here on the directive of the Minister of Interior, Mr Rauf Aregbesola through the acting CGIS, to see what is happening on the ground after the launch of the enhanced e-passport on December 20, 2021, and to come and clear the backlog.

“Before the launch, we knew that a lot of Nigerians had enrolled on the previous platform so on January 1, this year, the acting CGIS had an interactive session with journalists during which he promised that by the end of March, it is expected that the issue of backlog would have been a thing of the past.”

She encouraged Nigerians whose passports had not been produced that all hands were on deck “and we are working towards achieving the set target. The backlog is not in Ibadan only, but other parts of South West and North Central.”

On the issue of enhanced passport, Anyalechi said that the introduction of the online payment and appointment system had been working well and the applicants she met on the ground had commended the move.

“All you need to do is to go to any of our platforms, log in on http://www.immigration.gov.ng Assistant Controller

or http://www.passport.immigration.gov.ng, General fill the form and give proper information. After filling the form, click on payment. After payment, you are at liberty to choose any passport office where you want to be attended to at your own convenience by booking the appointment date and the time.

“On your appointment day, with your documents, the officers are waiting to receive you. They go through your documents. Once they are okay, you are good to go. You’ll be enrolled and go back home. When the passport is ready, you will be contacted to come and pick up your passport.

Anyalechi said that the enhanced passport was aimed at making the process of application and issuance of these documents seamless. “All you need is that when you log into our website or any of our platforms, you don’t need to sit on your PC to do it. You can use any of your devices. “When you start filling the application form, you can stop, save it and come back to it later and continue. More importantly, make sure that every information you are passing is correct, because that is where we always have one or two issues. People just put fictitious numbers and addresses, so when they have any issue and we try to reach them to resolve It, it becomes almost impossible.

She enjoined those who help in filling the application forms for the applicants to ask for their contacts so that the proper thing is done.

You go there, click on It, make enquiries, lay your complaints and make suggestions. It is on 24/7 and officers are there online. As you asking, they are responding,” said.

On the issue of NIN, the Assistant Controller said that since all were in pursuit of a single identity, “when you are going to any passport office, we expect everyone to have one identity. Make sure that the information you have is the same as your name and that of your passport, or if you are obtaining a fresh one. “For example, if you have shortened the form of your names on documents that you possess, you can’t come to the passport office and give the full name. People are arguing, for example, that Bayo and Adebayo are the same, but when it comes to documentation, they are not the same. If my initials are M.O., I can’t write O.M. They are not the same. Arrangement of names is very key. We are here to serve you.”

She admonished all intending applicants to cooperate with Immigration Service so that it would serve them better. On applicants complaining about being asked to pay various amounts after going online to apply, the ACG said that this was the reason Nigerians had been encouraged to adopt online payment to eliminate the third parties. “When you have seen the amount for the booklets and you have paid with your card, it is a way to reduce corruption to the barest minimum.

“When you pay and come on your appointment date with your forms filled out and your documents correct, who will ask you to pay? But if you meet an agent, they may ask you to bring N60,000, N70,000, because you have not made out time to know what is happening.”

She described the online payment and appointment system as user-friendly, saying “it is just one form that contains all the needed information. The only thing that can delay us from issuing your passport is when we are processing and find out you have supplied us with wrong information.”

3,006 Total Views Netflix will begin blocking subscribers from sharing their account passwords with people outside of their household in the…